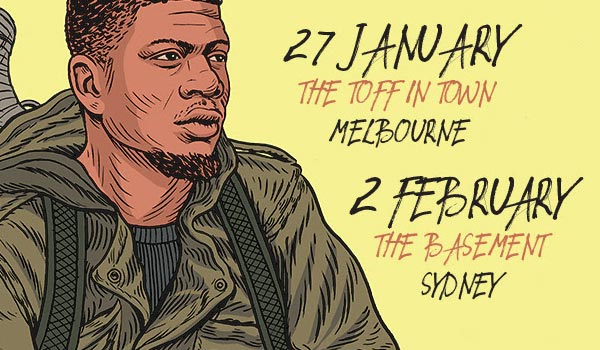 Already part of St Jerome’s Laneway Festival, the Alabama-born, Chicago-raised rapper will play Melbourne’s The Toff on Friday, January 27 before heading to Sydney’s The Basement on Thursday, February 2.

Tickets for both shows will go on sale at midday this Friday, October 28.

My Live Nation members can be among the first to secure tickets during the exclusive pre-sale beginning this Thursday, October 27 at 10am.

A 25-year-old on a mission, Jenkins follows in the footsteps of Kendrick Lamar, delivering politically conscious rap with important stories to tell.

2014’s mixtape “The Water[s]” delivered a LP-length metaphor of water as life’s truths catching the attention of critics and fans alike with Pitchfork complimenting its ‘tight focus’ and ‘songcraft’.

This year’s debut album “[T]he [H]ealing [C]omponent” continues to build Jenkin’s reputation as a young wordsmith on the rise. Having collaborated with current superstars Joey Bada$$, Kaytranada, Vic Mensa and Chance The Rapper in the past, Jenkins keeps the album forward-thinking with guest spots from acclaimed modern-jazz collective BADBADNOTGOOD and upcoming singer/producer theMIND.