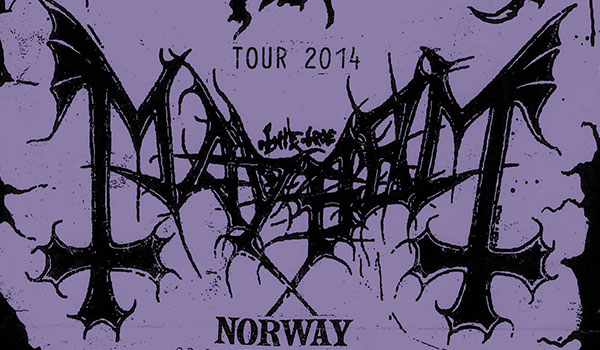 When it comes to the definitive history of black metal, only one name has survived all the sensationalism. Through the church burnings, murder, imprisonments and myopic teenage nationalism, only MAYHEM has been able to
channel the circus like atmosphere, which surrounded a core of fanatical bands, into a sustained musical career, in the studio and more importantly, on stage.

The year 2014 presents 30 years of cold, harsh existence, and MAYHEM reappear in Australia to regain the throne of darkness that is rightfully theirs. Featuring iconic members Atilla Csihar, Necrobutcher and Hellhammer, and with the reputation of being one of the most controversial live acts to ever disgrace this planet, do not miss out on this chance to witness and worship one of the true Norwegian black metal legends in the flesh.

Musically fuelled by forefathers such as Venom, Bathory, Metallica and Mercyful Fate, and spiritually fuelled by the lawless will of the liberated spirit, WATAIN is that dangerous flame of Metal that seemed lost for many years, and that now once again has been set loose upon the dying world.

Taking things to the next step – whatever the costs are. This has always been WATAIN’s goal from day one and this has never been truer than with “The Wild Hunt”, their fifth full-length album and out now!

MAYHEM with WATAIN and Nocturnal Grave performing at:

TICKETS ON SALE NOW FROM:

Buy through the Soundworks Touring or Prime Cuts Music websites with Paypal and receive a free MAYHEM sticker!