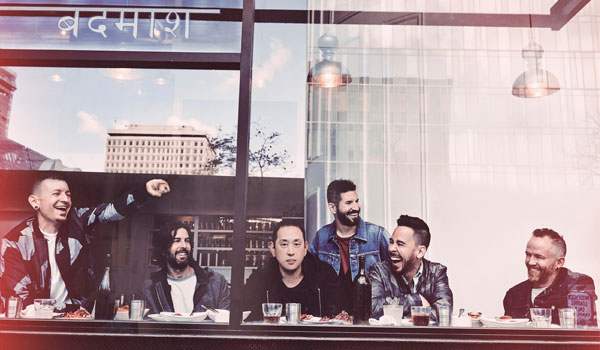 Continuing the tradition of reinvention and innovation, GRAMMY® Award-winning rock outliers Linkin Park enjoyed another career first today by announcing the May 19 release date of their seventh full-length album One More Light and debuting their new single Heavy (feat. Kiiara) on Facebook Live. One More Light is available to pre-order now.

As the biggest band on Facebook with over 62 million followers, the Los Angeles group delivered a stripped-down live performance  via the platform. Since its broadcast, the intimate set has already amassed over 500,000 views and counting. Linkin Park invited fans everywhere into the heart of their Hollywood rehearsal space as they performed the signature smash Crawling followed by the first-ever performance of Heavy accompanied by alternative pop songstress Kiiara. Fittingly, the show concluded with one of the band’s biggest hits, Burn It Down.

Linkin Park are not only the biggest band on Facebook, but also command a massive YouTube channel of over 3 billion plays and 7 million subscribers.  Their first album, Hybrid Theory, is the best-selling debut of this century in America, certified diamond in the US and 5 times platinum in Australia. Linkin Park’s most recent album, The Hunting Party, debuted at #1 on the ARIA chart. They have won 2 Grammy Awards, 5 American Music Awards, 4 MTV VMA Awards, 10 MTV Europe Music Awards and 3 World Music Awards. They have sold out stadiums around the world, headlining some of the biggest music festivals including Download, Reading and Leeds in the UK, Rock in Rio in Portugal and Summer Sonic in Japan, as well as the distinction of being the first and only western rock band to play a 5 stadium tour in China. Their most recent tour was the band’s most successful World Tour to date – playing to over 1.5 million fans in 16 countries. In 2005, the band founded Music For Relief, a 501 (c) (3) non-profit organisation dedicated to providing aid to victims of natural disasters and the prevention of such disasters. Since its inception, MFR has raised over 7 million dollars for multiple victims across 4 continents, including Hurricane Katrina, China’s Wenchuan earthquake, a cholera outbreak in Zimbabwe, earthquakes in Haiti and Japan in 2010, and Typhoon Haiyan in the Philippines.