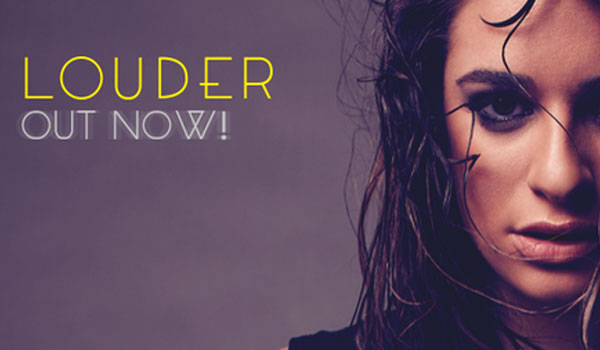 Marking Michele’s career as a solo artist, the album is underscored by the singer’s beloved pop voice, beautiful ballads, and emotionally-driven lyrics.

“LOUDER really encompasses my experiences over this past year and my journey as an artist up to this point,” said Lea Michele. “There’s a lot of emotion but it’s also very encouraging and hopeful — it’s about pushing forward and living your life in a way that’s louder, stronger and bolder. I’m so excited to share this new side of me with my fans.”

Recorded over the past year, stand out tracks on LOUDER include the Sia penned lead single “Cannonball”, the pop/rock anthem “On My Way,” and “Battlefield,” a heartfelt ballad also in collaboration with Sia. Other album favorites include the edgy-pop song “Burn With You,” and the title track “Louder” which culminates this eclectic album. Standout contributors include Christina Perri, Colin Munroe and Stargate. Lea’s debut album LOUDER is available for pre-order now and includes an instant download of her debut single “Cannonball,” visit www.LeaMicheleMusic.com for more info.

Lea Michele is best known for her performance as “Rachel Berry” on the critically acclaimed, Golden Globe, Grammy, and SAG award-winning Fox television series Glee. She has been nominated for an Emmy, a SAG Award, and multiple Golden Globes. The Glee cast recordings have sold over 10 million singles and garnered over 20 top 40 US Billboard Hot 100 hits. Currently serving as a spokesperson for L’Oreal Paris, Michele will release her first book Brunette Ambition this spring with Crown Archetype and lends her vocal talents as “Dorothy” in Summertime Entertainment’s animated 3D musical Dorothy of Oz, set for release in early 2014.