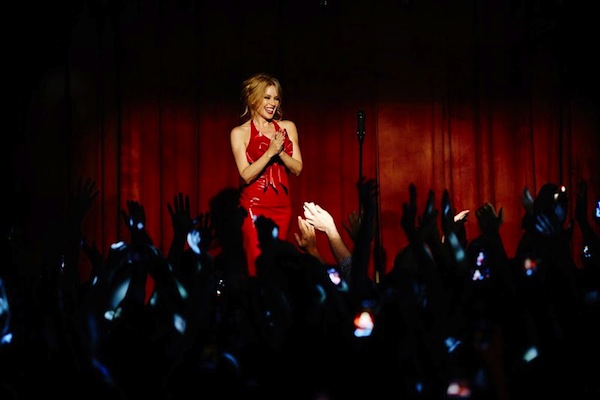 Get ready! Australia’s premier pop princess Kylie Minogue is jumping off your TV screens and on to a major arena stage near you.

Kylie said; “I’ve absolutely loved being back in Australia and now I’m even more excited to announce the dates for my Australian Kiss Me Once Tour 2015.  Bringing my show back home is always an amazing feeling so I can’t wait.  Get your dancing shoes on!” Performing in Sydney, Melbourne, Brisbane, Adelaide and Perth in March 2015, Kylie’s ‘Kiss Me Once’ Tour will be her first since the stripped back Anti-Tour club shows in Sydney and Melbourne in early 2012.    Notably it will have been almost four years since her last national arena tour of our shores.

Renowned for pulling out all the stops on her arena shows, the ‘Kiss Me Once’ Tour will feature songs from her #1 album ‘Kiss Me Once’ (out now through Warner Music Australia) and hits from across her extensive career.   Joined by her band and dancers, fans can expect first class production, plenty of glamour, and songs that will have them up and dancing the night away.

Currently gracing Australian TV as a coach on Channel Nine’s hit series ‘The Voice’, Kylie has proven once again why she is one of Australia’s favourite daughters.  With her new single ‘Sexy Love’ heating up the airwaves and dance floors, Kylie’s ‘Kiss Me Once’ Tour kicks off in the UK in September 2014 and tours through the UK and Europe before hitting Australia for a strictly limited number of shows.

KYLIE – KISS ME ONCE AUSTRALIAN TOUR 2015