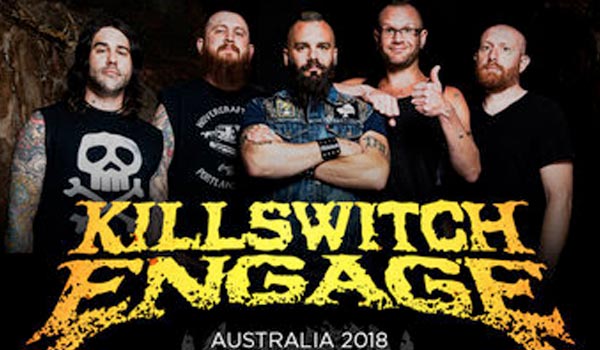 At the turn of the century KILLSWITCH ENGAGE spawned an entire genre with their earth-shattering debut, ‘Alive or Just Breathing’, earning the esteemed title as the Godfathers of Metalcore.

Built organically from the most potent components of melodic, heavy and catchy-as-hell European death metal and the essence of the most grimy, urgent and forever yearning American hardcore, the brilliantly individual KILLSWITCH ENGAGE have come to define a generational shift equal parts inevitable and by design, as cultural earthquakes and uprisings often are.

Joined by Justice For The Damned (Sydney Only), who back up every statement made with their Greyscale Records debut, ‘Dragged Through The Dirt’, Hysteria Mag calling it a “dark, abrasive, and supremely volatile listening experience” and Ocean Sleeper (Melbourne Only), hot off recording their debut album in the USA, among building a loyal fan base with their chart-topping debut EP ‘Six feet Down’.

For these two epic headline shows you can expect a killer career-spanning set from KILLSWITCH ENGAGE complete with chugging riffs, high energy and a hunger to perfect their attack on the movement they created. Having sold out shows on their previous tour, don’t miss your chance to see metalcore giants KILLSWITCH ENGAGE tear up these intimate venues.

Metro Theatre, Sydney (With Justice For The Damned)