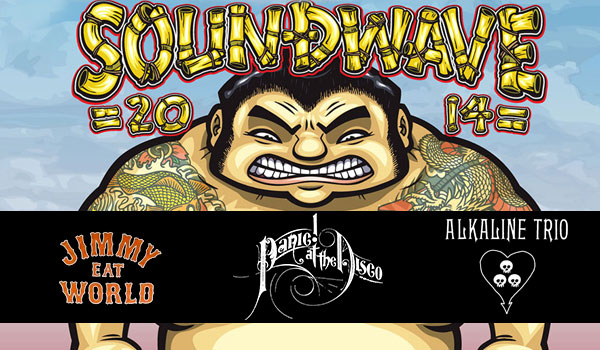 Emerging out of the mid-’90s scene, JIMMY EAT WORLD crossed over to a larger audience by embracing a blend of alternative rock and pop that targeted the heart as well as the head. The band’s influence widened considerably with 1999’s Clarity – an album that has since emerged as a landmark of the time but it was the band’s follow-up that crowned them as major figures. The band has released seven studio albums with the last six featuring the current line-up. The four piece’s breakthrough came with the successful release of the album Bleed American (2001). The band followed up with Futures in 2004 but it was the bands sixth album, Chase This Light in 2007 that became the monster record. The bands most recent album, Damage was released in April last year.

“The simple pleasures on Damage – the bells solo in “Book of Love,” the decidedly un­macho crunch of “I Will Steal You Back” – stir up plenty of warm feeling. But after all this time, you still won’t mistake it for afterglow.” – Rolling Stone

Las Vegas’s PANIC! AT THE DISCO have been labeled emo, pop punk, electo, vaudeville and baroque pop since the band’s debut album in 2005.  Fast forward 7 years and Panic! At The Disco’s coming of age in Las Vegas looms large on the band’s fourth album Too Weird To Live, Too Rare To Die! From its glittery synth-based, drum-heavy sound, to its playful, celebratory subject matter, to the Rat Pack-inspired imagery on the cover, to the title itself (a line from Fear and Loathing in Las Vegas author Hunter S. Thompson), the album finds the band, for the first time in its nearly 10-year career, owning up to loving their hometown.


ALKALINE TRIO formed looking for neither fame nor fortune, but instead working toward a potential future where their music would be meaningful to likeminded and/or disenfranchised people. More than 15 years into their career, the dark punk trio has cemented their legacy with their ninth studio album. Feverishly determined to never make the same record twice, Alkaline Trio nevertheless have preserved the most electric elements of their collaborative song-writing abilities, as their most diehard listeners have come to expect, while ever broadening their palette with new colours and extremes. The raw energy of ‘70s proto-punk, the darkly romantic sensibility and tongue-in-cheek wordplay of ‘80s new-wave, the upbeat melodicism of the underground power-pop movement of the ‘90s and the eclectic individualism of the new millennium all have a home in the Alkaline Trio sound.

For more information head to www.soundwavefestival.com