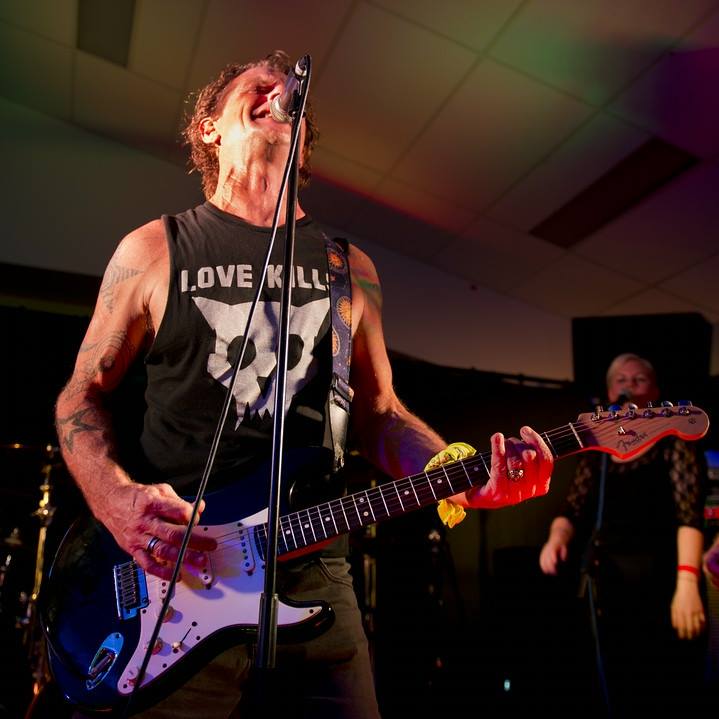 Team Utopia’s spunky front man, Dan Nebe, is no stranger to the live music scene. Whether he’s working on stage or behind the scenes, music is his passion and rock ‘n’ roll veritably drips off him. Dan is also a huge supporter of music-backed charities, including Rockin’ 4 the Homeless, an annual fundraiser with direct benefits to the Redcliffe community and the homeless. This year sees the band releasing a new single and accompanying video, as well as (fingers crossed) an EP. We caught up with Dan today to chat about the band, his inspirations, and the Brisbane music scene.

SR: You’re heavily involved with the Rockin’ 4 the Homeless charity shows. Can you tell us about that initiative and how you first got into it?

DN: Well it’s a cause very close to my heart.. I got involved back in 2013 with a bunch of friends and its just grown like we could have ever imagined. There are some hard working people on the frontline out here in Redcliffe and they need help. The music community as a whole has supported this event and it seems to be growing in support from many sectors.

SR: Team Utopia is known for energetic live performances. When did you first get together and how would you describe your sound?

I started the band in 2011 and have had a few line-up changes. I found the current band (or they found me) back in 2014 and we just clicked. I couldn’t be more comfortable with them: Grant Boath on bass, Chris Beavis on lead and Robin Clements on drums. They’re all seasoned players and just blow my mind. We have Grant’s wife, Kim, rounding it off with some very cool backing vocals. I would describe our sound as Australian rock meets Iggy Pop. SR: Your video for Where is My Heart showcases your great sense of humour. What was it like shooting that clip and who’s the champion in the work-out gear?

SR: Who are your major musical influences?

DN: I guess it all began when I first heard Angus bashing the shit out of his SG. I love Iggy Pop and Groove Armada. I have a strange crazy liking of everything that makes noise. Right this moment, I’m loving The Hoodoo Gurus (I’m working with them at the moment and just cant get the songs out of my head).

SR: What’s your vision for the band?

DN: My vision is to do some cool supports. I don’t have any illusions as to where it will all go. Im just happy plying my art to the masses and if one person comes up to me and says they liked it, then I’m ahead in my head.

SR: When did you first get into music and realise you could sing?

DN: I first got into music when I was 10. One of the nuns at school showed me the D cord and it went from there. As far as when I realised I could sing… Ha Ha. I cant.. I just wing that shit.

SR: I’ve had the pleasure of seeing you guys play live and you’re amazing. Do you get nervous before you go onstage and what do you do to prepare before a gig?

DN: Well thanks for that. Yes, I start shitting myself around an hour from going on stage. Like most artists, I have lots of self-doubt and almost feel like backing out at the last minute every time. I prepare by being with my friends and taking the piss out of the rest of the band. Oh and 2 beers and a shot of tequila gets me over the line every time.

SR: Are you guys working on new material?

DN: We are recording the next single and shooting a video for it. Our booking agent is working on some things and we have been offered some festivals later in the year. For now it’s just one gig at a time.

The guys are all so busy and getting us all together is a mission. There’s no album planned, however an EP has been mentioned…

SR: People who know you are aware of your huge commitment to worthy causes, aside from Rockin’ 4 the Homeless. You’ve been part of Redcliffe Flood Relief, for instance, and you regularly post on social media about the importance of being there for people in need. Do you feel that artists have a social responsibility?

DN: Yeah, I’ve always been inspired by Bob Geldof and people like him. I think it is very important to help our fellow humans. One down, all down is a motto I like to use. The creative crowd are notorious for doing what we can for others and it always needs someone to get it off the line. I find it amazing how everyone jumps on and helps out. The music community out here is hell-bent on helping whoever they can. Im just one fish in our pond of people who give a shit about others.

SR: The Brisbane music scene seems to be thriving, lately, with great venues and so many gigs on offer each week. Which are your favourite venues to play in and what are your feelings about the new lock-out laws?

DN: I think the scene in Brizvegas is awesome. We have so much talent getting around and so many almost famous bands bashing away in garages and bedrooms. The venues are getting scarce, however the ones that are pumping are doing it in a big way. I don’t want to comment on the lock-out laws as I’m sure you won’t be able to print my response.

SR: What’s the best thing about being a rock front man?

DN: The best thing is just closing my eyes and putting myself in the place I like to be. I wouldn’t call myself a front man. I’m more your dickhead at the back of the bus.

SR: Do you have any strange fan requests or funny gig stories you could share with us?

DN: No nothing to see here….. I will have to kill you if I tell you anymore.

SR: Do you have a message we can send out to punters heading to Rockin’ 4 the Homeless 3.0 this Saturday?

DN: Just get your arses to the gig. These guys need help and we are giving to them. Just by turning up and supporting the event is helping. We have some great sponsors and every cent raised goes to the cause. Some of the hottest acts in town are going to blow minds… See you there.

Get along to Rockin’ 4 the Homeless 3.0 this Saturday, March 12th at Dolphins Leagues Club in Redcliffe. Catch Team Utopia, along with The Radiators, Dave Evans (ex-AC/DC), Hill 60, Dirty Liars, and a heap of other great bands for a very reasonable price. There’s $5000 in raffles to be won, and all proceeds go to homeless relief. Get your tickets HERE.