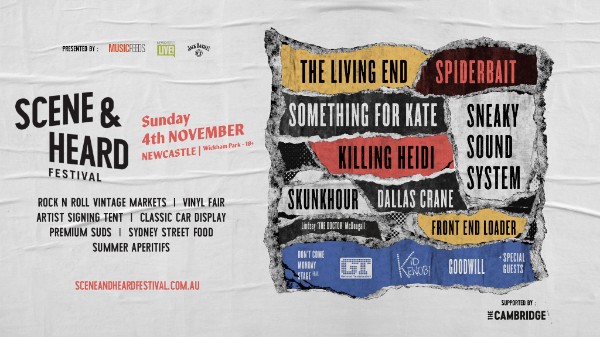 Say hello to a brand-new festival that isn’t just a line-up but an immersive journey back to when Spotify didn’t exist, and that 1999 triple j Hottest 100 CD was the only thing repeating on the car stereo.

Strutting into Wickham Park, Newcastle on Sunday November 4, SCENE & HEARD brings together a boom box full of talent in its first year. a line-up designed to recreate moments in time. Those moments begin with The Living End. Forging a path like no other this legendary band of rockabilly heroes have conquered the globe countless times and return to headline the ultimate Sunday session with new album Wunderbar in tow.

Prep for a giant sing-a-long as one of the finest voices in Australia, Paul Dempsey cranks out classics like ‘Monsters’ and ‘Three Dimensions’ with Something for Kate making a welcome return to Newcastle. Absolute thumpers Spiderbait join the ranks too with must hear throwbacks like ‘Buy Me a Pony’, ‘Black Betty’ and ‘Calypso’.

Killing Heidi join the SCENE & HEARD pack following a stunning resurgence to celebrate 20 years since their inception. Also kicking off the main stage are Aussie indie mainstays Dallas Crane, Skunkhour and Front End Loader. And keeping everyone in line (or out of line) is the man, the legend that is Lindsay ‘The Doctor’ McDougall as master of ceremonies.

HOSTED BY LINDSAY ‘THE DOCTOR’ MCDOUGALL