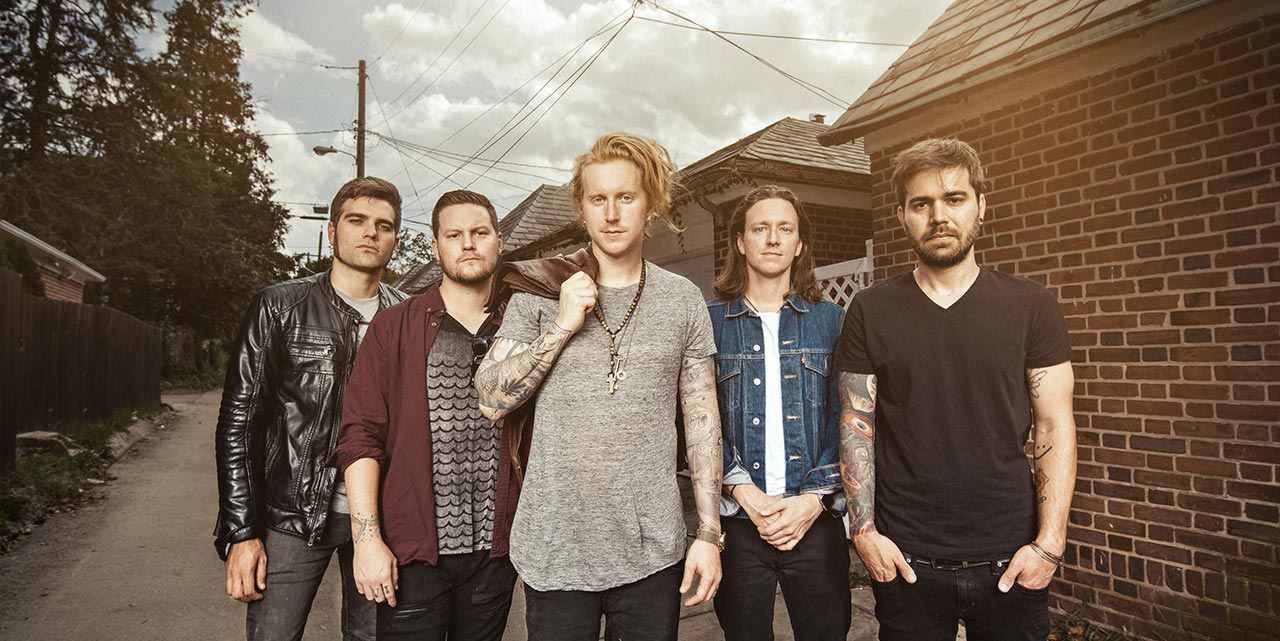 We The Kings have been filling the world with love and happiness since their first hit Check Yes, Juliet was released almost 10 years ago! More recently their newest album Strange Love was released late last year with their legacy of pop – rock love tunes not being defiled and off the back of that Australia and New Zealand will be getting the first tour to hear all the new songs and classics played later next month.

Once again thanks to our amazing friend John Howarth from Metropolis touring we got the awesome chance to have a chat to their front man, whom politely setting the mood, Travis Clark explained to us that he was currently walking his newborn – Kinsley down the street because she wouldn’t fall asleep – and with that knowledge we started the interview.

SR: How was your Christmas and New Year with your new baby in your life and your first wedding anniversary?

It was amazing! There was a lot to be celebrated the past few weeks, but my baby girl definitely took the cake! I didn’t even realise that we were doing a Christmas or a New Years – I’ve just been obsessed with my baby.

I actually threw a party on New Year’s Eve with a bunch of the guys from the band and we solved a Murder Mystery. So about 32 people came to my house which was called for the night “The Grand Hotel” and played this mystery where I gave everybody different characters, everybody had to dress u- it was really, really cool.

Our wedding anniversary was actually really low-key. My wife and I just kind of laid around and relaxed. We got Cheesecake Factory- which is out favourite restaurant to eat here. It’s different after you have a baby- it’s kind of not about you anymore.

SR: You’re coming back to us in a matter of weeks for a string of shows throughout the whole country, what do you have planned for us?

I know! I actually looked at our flight schedule recently to get a feel for what we were doing. It’s Orlando – LA – Sydney – Auckland, because we’re starting the tour in New Zealand, and in total it’s 29 hours that we are travelling to come and play for Australia. I’m really excited, I don’t know why it took us so long to get back, but we’ve had such an amazing response so far from the fans who have been waiting and haven’t lost faith in us [laughs]. I think this will be our best trip overseas to date.

SR: As a set list we’re hoping for a mix of songs from all your albums, can you give us a bit more info on that?

Yeah, I think we’re going to prepare four different set lists and the reason we are going to do that is obviously is all the hits will be on the set – like I don’t think we’ve ever played a show without Check Yes, Juliet or Secret Valentine or Say You Like Me. But, what we want to do is promote what set list the fans can choose from and we’ll probably mix it up by four or five songs so each city can choose what set they want us to play. A lot of times what happens in the states is that people will come to multiple shows and we don’t want them to see the exact same thing, we want to change it up not only for our fans, but for ourselves.

We’ll be playing stuff from all our albums and probably about 4 or 5 from our new album.

SR: Your newest album Strange Love was released about a month and a half ago, how has the reception been and has it exceeded your expectations?

I guess the best way to explain this is there is a website which one of our friends who works at iTunes sent me, it’s called Whale Report and essentially you put in a band name; the fans can do this too, and it will tell you every time your song or your album charts in a specific country.

For me I put in We The Kings, so every time WTK, it doesn’t matter what album it is, every time it charts on iTunes it will send me an email. It’s always so fascinating to see which countries chart the albums the quickest. It’s usually Australia, Canada, The US and randomly enough, Germany – which I don’t understand because we’ve only been there about two or three times. But then it will get really crazy and it’ll be like “Strange Love is number 1 in Slovakia”, or “Strange Love is number 2 in Russia” – sometimes it’ll be countries I’ve never even heard of and I’ll wonder how man albums you have to sell in Ethiopia to becomes number 1?

So that is how I actually judge the response of the new album of how many random places we can be number 1. But also I judge it on the response from our friends and family, the people that hit us up online. Personally, I don’t care how you got the album, I care more about when we come to your city, you coming out to the show and having an unbelievable once in a lifetime experience that you can’t download or rip from a friend.

Other than an annual show that we do every year in our hometown – Australia will be the first tour to hear the new songs live.

SR: You’ve always said that your “goal for We the Kings is to make the world happier”. Do you think you’ve achieved this?

I think for some people, yeah. I mean, I’ve always said this and I think even through all the years of us changing musically and my personal life changing I still think that goal of making the world a better place, a happier place is still a goal for me. If it’s just one person that is happier, then I feel like my work is done, because in the grand scheme of things; if everyone in this world makes one other person happy, that would be everyone in the world happy.

Its crazy now having my baby, I want my daughter to grow up in a world of love and I want somebody to say nice things to her, to be kind to her and respect and love – all those things as a father, but then you realise that you want it for yourself.

SR: Do you have any memorable fan stories you can share

Well there are two things I will say, the first is we got offered in South Australia to go on a Great White Shark cage dive and then on the way back they fish for tuna and every bit of the tuna they catch they slice up and feed you sushi, it’s like a whole day trip and it was a fan that organised it. They messaged us being like “hey we know that you’re obsessed with sharks, you can do this” and they booked it for us. So that I think will probably become one of my favourite fan stories.

The second this is there was this one recently. There was this 16 year old girl and she like stole her mums wallet and booked herself a plane ticket to come see us at our hometown show. So she flew without her parents knowing, she got us on the phone because she literally asked us to talk to her parents and they thought she was at a friend’s house. So I get on the phone and I’m like “hey mum!” and I think she’s like from the next city over, and she had this real strong Scottish accent. I was like “are you from Ireland or Scotland?” and she replied with “I’m in Scotland”, so I said “oh wow that’s so awesome to let your daughter come to our show! That’s amazing” and she was like “WHAT?!!” and freaked out! The daughter then got back on the phone and was like “mum, mum, mum, mum, I’m coming back tomorrow, I’m sorry but I had to do it” and literally every single member of the bands jaw dropped. It’s crazy to think about but that’s a story that she will have for the rest of her life.

Fix You by Coldplay. Every time I listen to that song it never gets old for me. I’ve always said that that’s the song I wish I wrote because like, I love everything that Coldplay does but there is something about that song that I think for not only me, but saved a lot of people. Catch Travis with We The Kings on tour late February!