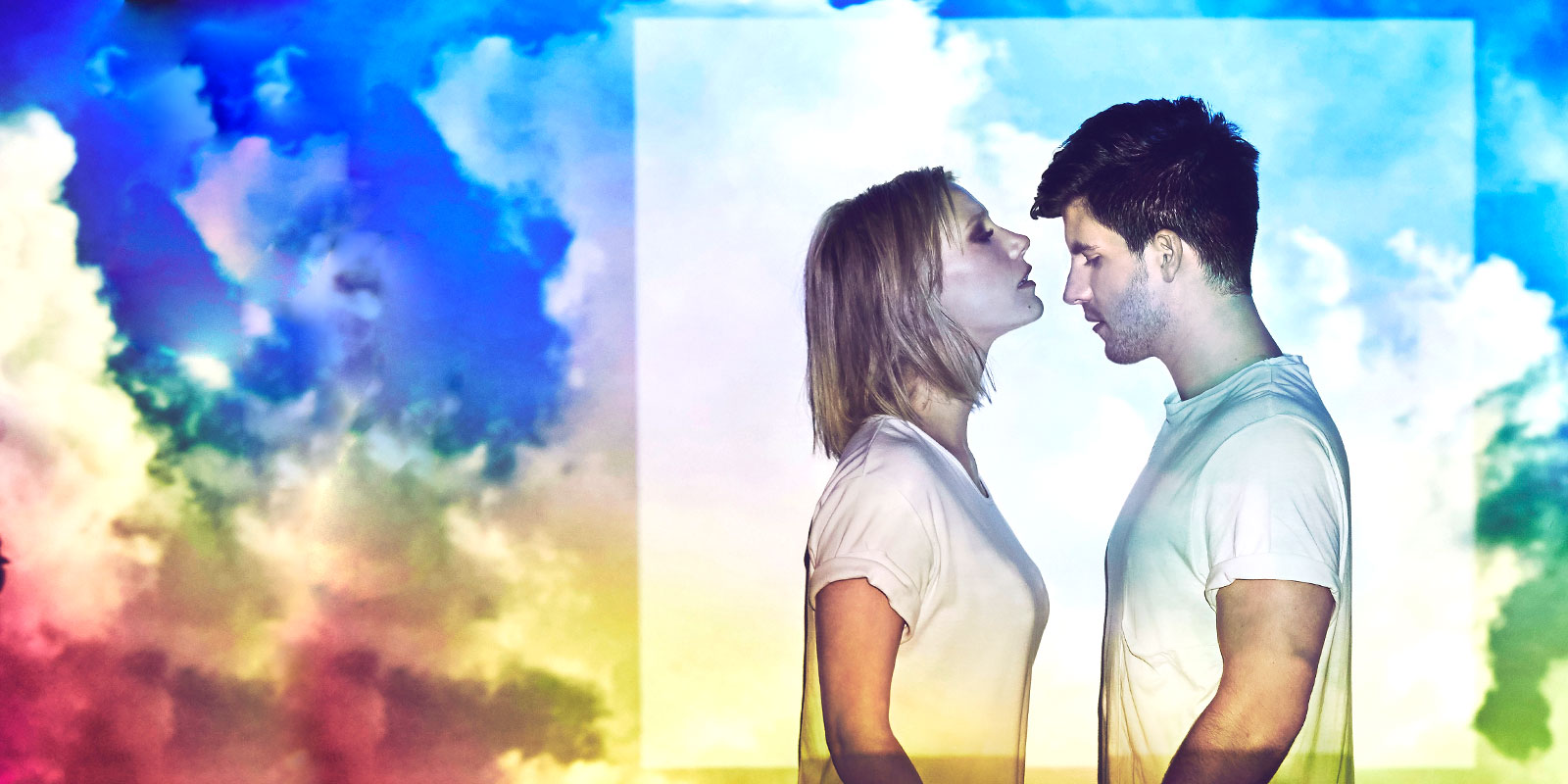 Jess & Matt are a duo who were thrown into the spotlight from their time on The X Factor and despite not winning the competition, Sony Music Australia signed the talented pair where they released an acoustic sounding self-titled debut album. Now, Jess & Matt return to their musical past, with an electronic pop track entitled ‘Bones’, which is out now.

Jess & Matt kindly took time off their day to share with Spotlight Report how they came up with idea for ‘Bones’, what it was like to work with the legends that is DNA Songs and having Stevie Nicks dedicate a song to them.

Could you give me an overview of what Bones means to you and how it came about?

Matt: Yeah, Bones is a bit of a new experimental track that experimented with our sounds. We sort of wanted to close ourselves off from expectations and go for a bit more of an electronic base but the song sort of came around about a modern relationship and how trust comes into it. When me and Jess met we were surrounded by friends’ relationships where they didn’t really trust each other and there was no element of trust and they probably would never just leave their phone lying around. Then there was this line that just came up which is crazy to see how in a modern relationship technology can end up playing such a big part. Especially with all the social media we use and people will make assumptions if you’ve liked a photo and they will be like ‘Oh, what’s going?’ and that has actually broken up couples, which is actually crazy. So we kind of put a line in the song where we kind of take a stab at those types of relationships because when me and Jess met everything was out on the table and it was really refreshing to not have to worry about that and that whole element of mistrust and stuff.

How do your friends feel when they hear that you’ve written songs or lyrics about their lives?

Jess: (laughs) I think they don’t really know it is about them.

Matt: I think now that we have said that, I think a few of them we’ll figure it.

On the topic of relationships, do you think being in a relationship with your music partner changes the way you make music? Jess: Yes, it took us a while to get used to writing together. We have been together for about six years.

Matt: Yes I think the first thing with writing that is a little bit awkward is that we don’t always write about your own relationship and that is actually something that when you are writing with your partner and you start to write a line about a previous relationship. It’s kind of like ‘oh, who is that line about?’ and that can get awkward. I mean we have written some break-up songs before and they are not reflected on us. So that’s sometimes a tricky thing to do, because you are always writing about experiences that have happened to you so reflecting back, you sort of go ‘oh, so we are talking about this relationship now?’ and it can get a little bit awkward at times.

Jess: But we have accepted it now (laughs)

‘Bones’ definitely moves away from your usual folk and acoustic sound and edges towards pop and electronic, would you say creating a pop song felt out of your comfort zone?

Jess: We actually had an electronic project before we started the show, so I think to other people it really sounds like we are doing something completely different to the album and the show, where we were quite acoustic. But to us, it doesn’t really feel that different. Our goal is really just to write a great song, no matter what the production is and even if you take all the production away and you play it on a guitar or keyboard, it is a good song stand alone. So I think it’s more the production that will really change people’s minds and I feel like we always have to changing and evolving because that is really important for us.

So will we hear more of this then on your next album?

Matt: Yes, definitely. It is a sound that we have had in our mind for a while and it just feels like the right time to release that experiment after we got that acoustic album out into the world. That chapter has started but now it’s time to go onto to try some new things and really explore more of our influences. So we are pulling on influences from Flume through to Troye Sivan. We wanted to do something that has really been heard or expected by us and this next album is really going to have drum and bass a bit more but that songwriting element that is true to us.

So you guys worked with DNA Songs on this track, who are legends in the Aussie music scene, what was it like to work alongside them? Jess: It is incredible! They are just machines. If you talk about hit writers in Australia, they are the guys to go to and they are just so so talented. They wrote ‘Nothing Matters’, our first single, and we came to them with this new idea for this sound and they were so open to experimenting, especially with production. It was something different for them as well. It’s not as pop as some of the stuff they have worked on. So I think it was such a good moment for discovery for all of us.

Matt: Especially being a room and being on the same level as them. They are songwriting royalty and to be writing with them and coming up with something new was definitely uncharted territory for them going into this world. So it was really amazing to see how they work. It was pretty crazy, especially since they just won the award for the Eurovision songwriting award, which has never been done by an Australian so that was amazing to watch them work and create something that they haven’t made before.

What’s life been like for you both after the X Factor? Do you feel like you still the same creative support that you did on the show?

Jess: It was so amazing to work with those producers, especially The Squared Division who were the creative producers on the show, and the set and everything that they created were ridiculous. So coming off the show, it was such a shame they we just couldn’t bring them everywhere with us for every show because they are like Grammy award-winning performances with their sets and everything. So I mean, it’s definitely harder by yourself but we have had the support of all of them. They have emailed us when they heard ‘Bones’ and said they loved it and how it was heading into a new direction for us, so the support has been there as soon as we walked off the show.

Matt: Yes, after going out, we realized we were sort of in TV land and it’s just insane because you have this amazing crew working with you. It really doesn’t get any better than that. But coming off the show, you enter the real world again and being on a label that is the biggest label in the world being Sony Music, you realize how the work really begins there and you’ve really got to proof yourself in the industry. It’s not just TV anymore, it’s real life but Sony have been right behind us to help us recreate ourselves, which is a big risk. We were doing something completely different after having a show like the X Factor behind you and they were really supportive and they said ‘Go experiment and see what you come up with’.

Lastly, before some fun questions, what’s next for Jess and Matt?

Jess: We have been hibernating for the last six months and working with a whole bunch of different producers. So an album is definitely on the horizon, most probably an EP because it is quite a new sound and we want to get on the road as soon as possible just to give back to the fans and just to meet them again because obviously we needed that time to write and just really find ourselves, soundwise.

Matt: The last six months has been a really period of setting ourselves up and working towards this new album and putting ourselves in these rooms with all these different types of producers. We are going to be working with Guy Sebastian who was our mentor, and that is very exciting.

So the first of our fun questions is – where is the strangest place you have ever heard one of your tracks being played and what was your reaction to it?

Jess: It was in the car and we were driving up the coast and one of our songs came on the radio on Smooth FM and we lost it, screaming and snapchatting.

Matt: Well we always get calls from our parents whenever they hear it. They always seem to hear it in weird places. I always miss it when our songs are being played. But we were being played at an Airport in Auckland, I heard. But whenever we hear our songs when we are driving we just have to pull over and have a little bit of a dance (laughs)

What has been the highlight of your career so far? Jess: I’m going to say definitely meeting Stevie Nicks, she is one of our biggest idols. While we were on the show, we went to a Fleetwood Mac concert and she actually shouted out ‘Landslide’ to us and dedicated the song to us and we could not believe it.

Matt: Yes, that was crazy, she is probably our biggest idol. There is no one bigger than that for us. And she said ‘You know what, I love being in Australia and I’ve been watching the X-Factor and I’ve been watching this duo and I found out they are in the audience and just keep going and the world needs a great duo’. That has probably been the biggest pinch yourself moment by far.

If you could have written any song, what would it be and why? Although after that story, it seems pretty obvious now.