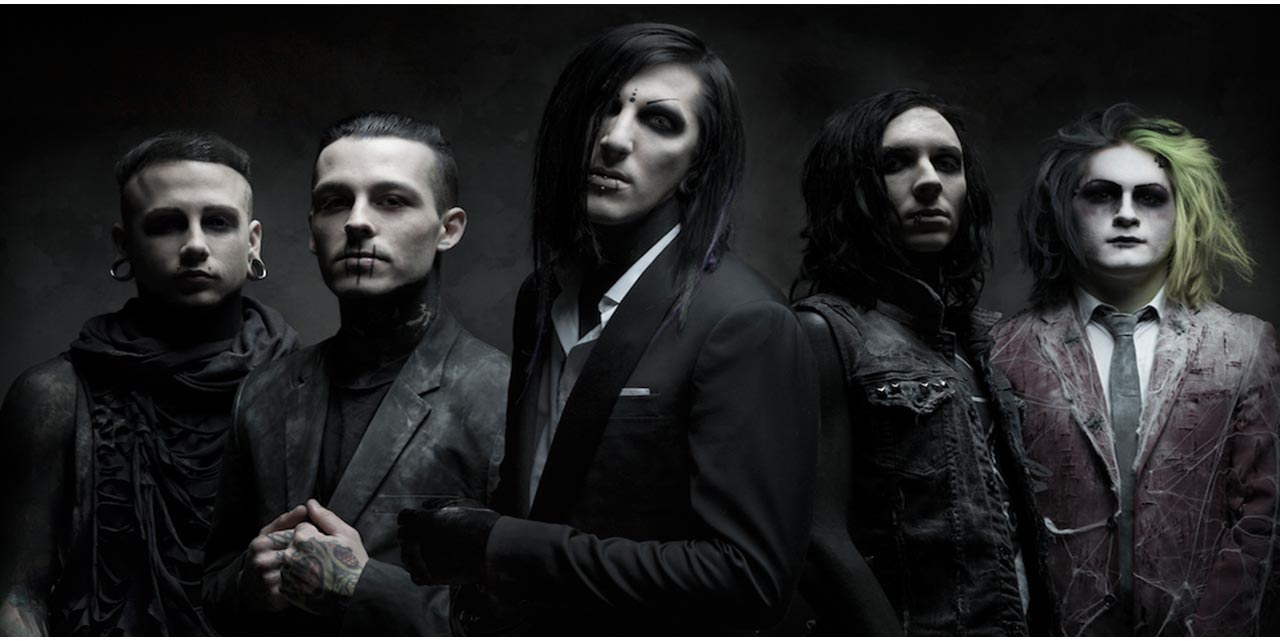 As the days go by the Big Ass Tour countdown is getting shorter! Opening band Motionless in White are coming back to make their first round of club show debut after the release of their latest album Reincarnate late last year along with the Big Ass line up.

Thanks to Genna from Super Duper we got to talk to the fabulous lead singer Chris Motionless about the tour, along with a few makeup tips and the new Suicide Squad flick!

SR: How are you feeling about the upcoming tour?

Feeling fantastic about it! A major point for me to be excited about it is that we’ve been to Australia twice on Soundwave and this is our first venture into indoor vibe, I was going to say indoor club but they’re not even clubs – some of them are actual arenas! It’s really exciting! We thrive in a club vibe.

SR: Are you feeling a little bit of pressure because of the line-up you’re opening for?

Not necessarily, I feel like out of the bands we have the least amount of pressure. We’re opening the show’s most of the days. It’s kind of an easy thing for us to do because the other bands are the main focus, everyone wants a big show out of them- but for us it’s more of a relaxing, go do our thing. We don’t have to worry about production and all that other stuff but we’ll still hit it hard and try and collect as many new fans ad we can.

SR: It sounds like a bit of a holiday for you then.

Honestly, this trip is for sure going to be more of a vacation than work related. We play for 30 minutes a day, I think we’re going to try and do a signing everyday – aside from that we’re just going to hang out and really try and explore Australia, and hang out with some friends from over there.

SR: With such a huge line-up, if there was one of the other bands songs you could perform either a cover, or with them, what would it be?

Well actually, we’re pretty good friends with The Ghost Inside*. We’ve done a tour with them probably once a year for the last four years, and most of the time that we’ve been with them I get up and sing Between the Lines with them! I’m pretty sure on the tour I’ll be doing that, unless one of the other guys in the other bands are going to do it.

SR: What kind of set list will we be looking at?

Unfortunately we’re only going to get probably a 30 minute set, so we’re going to play majority of the songs that people would know, so that way there isn’t like a boring low point during the set. Like if you’re headlining, you’ve got that low point where you’re playing some deeper tracks, but for a set like this you’re going to want to go out and play the songs that are going to hit people and that they can sing along to.

The two times that we’ve been to Australia we kind of got an idea about the songs that people like, but this is our first time playing anything off the new record, and a few singles off of that.

SR: Your latest album was released in September last year, any new music for us on this tour?

It’s definitely too early for new music at this point, we haven’t got the full picture painting. I wish, but it would have to happen when the new record comes out that we will get to play anything extra new for Australia. It’s a bummer but, it is what it is.

SR: So you dressed up as the Jared Leto’s Joker for Halloween, are you excited for the new Suicide Squad film?

Yeah I am! I really can’t stand when people immediately share their “expert” opinion and everyone just ripping upon his character and that version of the Joker. Like, shut the fuck up – it looks rad, I don’t care if looks like Marilyn Manson or whatever – it looks sick! I think he [Leto] is going to bring a new reinvention to the character as everyone before has done. But yeah, I’m excited.

SR: Your makeup is beyond fabulous, have you got any tips to make my face last throughout a full working day without looking like Alice Cooper at the end?

[Laughs] well, it sounds like you would like to know how to maintain your makeup throughout the day. My only secret with that is to use a setting spray stuff, which pretty much glue’s the makeup to your face, so that would be my first offering advice. At the end of the day, if you’re looking like Alice Cooper, not like the nice lady you want to look like, that would be your magic formula.

SR: Do you have any memorable fan stories you could share?

Let me look through my phone because I have a whole list of stories in there. I’m looking for one that I’ve never told anybody else.

I guess we can just go with a positive and a negative one.

We were playing one time in San Antonio, and it was super-hot, this girl in the front just like passed out. So we got her up over the barricade and on the stage and she just started having a seizure. We didn’t know what to do, or how to handle it and that was one of the most terrifying experiences we’ve ever had. Just feeling so powerless in a situation and it felt so shitty that we couldn’t help.

Then, one of the more funny ones- we played in Chicago a couple pf years back and there was a kid who stood outside on the sidewalk, banging on the door of the RV we were in, screaming our songs at full volume at us for probably like 30 minutes straight. We would like go out there to talk to him, but he wouldn’t talk, he just kept singing and screaming. It was really bizarre. I’m still yet to figure out why he was doing that.

SR: If there was any song in the world you wished you’d written, what would it it?

Oh my god! That’s like the toughest question I’ve ever been asked! If there was any song I wish was written by Motionless in White in would be People = Shit by Slipknot.