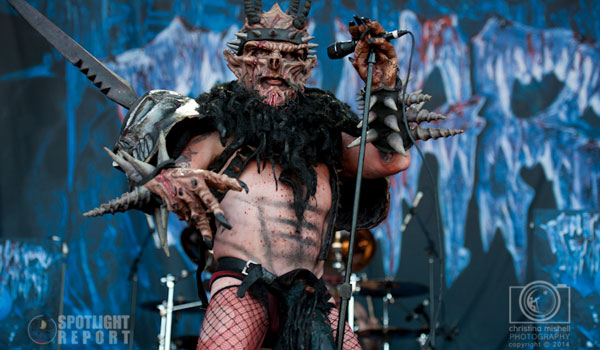 Shocking news for heavy metal fans, as GWAR frontman, Dave Brockie, better known as the mighty Oderus Urungus has passed away at the age of 50 at his home. The cause of death, at this point, is still unknown. Brockie, was recently in Australia playing Soundwave Festival with GWAR, a visit that will be remembered forever for their awesome, controversial and bloody show, where they even “cut the head of PM Tony Abbott”.

Dave Brockie aka Oderus Urungus, left a mark with his music, and hilarious dark sense of humour during his career. It feels like it was yesterday when we interviewed him about his visit to our shores to play Soundwave or when he made his entrance at the media area backstage at the festival in full character kicking chairs, making everyone around laugh.

GWAR’s latest album, Battle Maximus, was released last year in honour of the late Cory Smoot Aka Flattus Maximus who passed away unexpectedly in 2011.

This is the official statement by Jack Flanagan, manager of GWAR

“It is with a saddened heart, that I confirm my dear friend Dave Brockie, artist, musician, and lead singer of GWAR passed away at approximately 6:50 PM EST Sunday March 23,2014. His body was found Sunday by his band mate at his home in Richmond, VA. Richmond authorities have confirmed his death and next of kin has been notified. A full autopsy will be performed. He was 50 years old, born August 30, 1963.

My main focus right now is to look after my band mates and his family. More information regarding his death shall be released as the details are confirmed.”

Rock In Peace Dave!
You are now part of the cosmos and we are sure you will rule the galaxy alongside Flattus! Godspeed