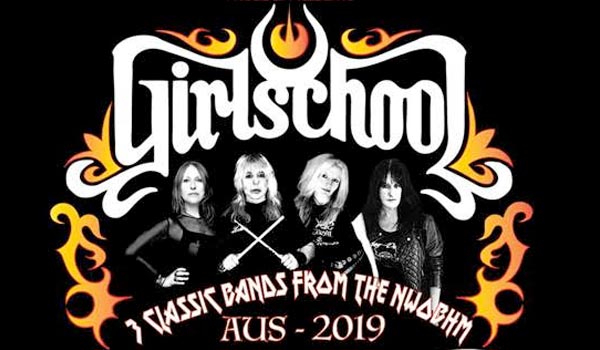 GIRLSCHOOL are a British rock band that formed in the new wave of British heavy metal scene in 1978, frequently associated with contemporaries Motörhead. They are the longest-running all-female rock band, still active after almost 40 years. Formed from a school band called Painted Lady, GIRLSCHOOL enjoyed strong media exposure and commercial success in the UK in the early 1980s with three albums of ‘punk-tinged metal’ and a few singles, that placed them up there with the legends of NWOBHM

We’ll never have Motorhead again, but we can have their mates.

Formed as Venom in 1979 in Newcastle upon Tyne, England. And coming to prominence towards the end of the new wave of British heavy metal, Venom‘s first two albums—Welcome to Hell (1981) and Black Metal (1982)—are considered a major influence on thrash metal and extreme metal in general. Venom’s second album proved influential enough that its title was used as the name of an extreme metal sub-genre: Black Metal.

And last but not least – FOR THE FIRST TIME EVER IN AUSTRALIA – RAVEN!!!!!

RAVEN are that rare thing in music true originals – cut these guys with a razor and they will BLEED true heavy metal!!!

Join the crazy Gallagher brothers along with these 2 other pioneering bands for a night of TRUE BRITISH HEAVY METAL!!!!!!

LIMITED VIP MEET AND GREETS AVAILABLE, MEET ALL THE BANDS AT ONCE