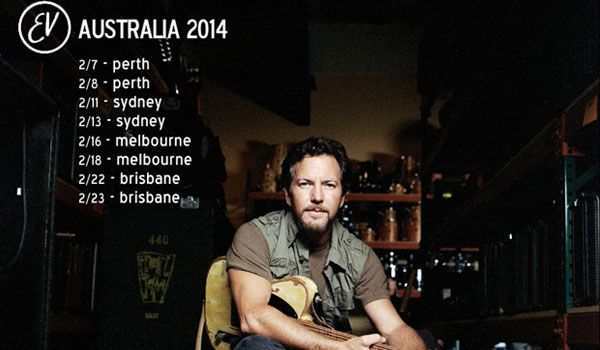 Chugg Entertainment are thrilled to confirm that Pearl Jam’s notorious lead singer, Eddie Vedder, will be embarking on a long-awaited solo tour this coming February. Vedder will return to the stage in solo mode for a string of extraordinarily special theatre shows; live and intimate.

The tour will begin with two dates at Perth’s Riverside Theatre on Friday 7th and Saturday 8th February, Sydney’s State Theatre on Tuesday 11th February and a performance at the Sydney Opera House on Thursday 13th February, Melbourne’s Palais Theatre on Sunday 16th and Tuesday 18th February, and the QPAC Concert Hall in Brisbane on Saturday 22nd and Sunday 23rd February.

Stepping out of his renowned role as the famed front-man of Pearl Jam has been more than well received by his Australian fans following the monumental response to his previous tour in early 2011.  When shows were announced, fans across the country erupted at the news and within hours of tickets going on sale to the public, more than ten theatre shows across the country were completely sold out leaving a plethora of fans empty handed and wanting more.

The staggering shows left fans and reviewers enthralled, with the Sydney Morning Herald citing of his State Theatre show that “he received ample love for his vulnerability” while “an adoring crowd hung off his every note.”

Following his last Australian tour, Vedder embarked on another chapter with the release of his second solo studio album, Ukulele Songs. Yet another critically acclaimed project described by Drowned In Sound as and album “brimming with integrity and enthusiasm and, most importantly, boasting great tunes.”

Bringing to the stage a swathe of songs from his solo records, as well as some Pearl Jam favourites, there can be no doubt that yet again, his Australian audience will stop in their tracks when Eddie Vedder takes the stage.  These enchanting shows are not to be missed.

Check our reviews for Eddie Vedder’s 2011 Australian tour below:

TICKETS FOR ALL SHOWS GO ON SALE WEDNESDAY 18th DECEMBER, 10AM