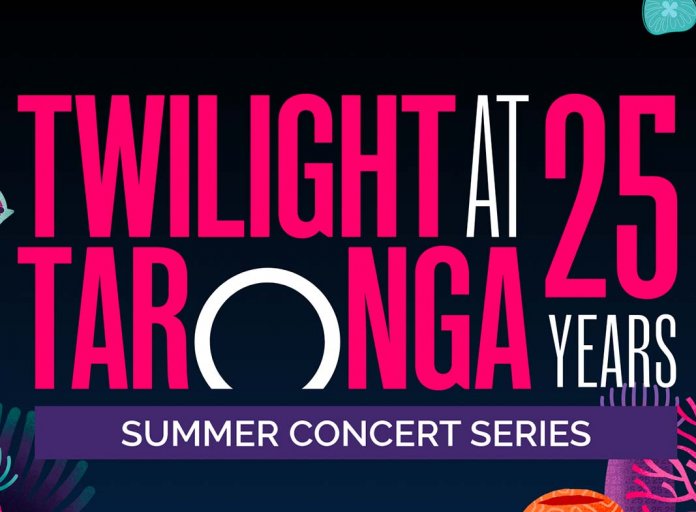 Bringing together the breathtaking views of the Sydney Harbour skyline at dusk with the sounds of another all-ages* live music line-up, the Twilight at Taronga Summer Concert Series begins on Friday January 31 and runs until Saturday March 7 during its 25th anniversary year in 2020.

Tickets are on sale at 12pm on Thursday October 31 from twilightattaronga.org.au and all proceeds contribute to Taronga Zoo’s ongoing conservation work including the Litter Free Oceans campaign to reduce single use plastics.

Opening the series on Friday January 31 is NZ duo Broods who will bring their beautifully nuanced synth-pop to the stage ahead of Wolfmother on Saturday February 1 whose iconic songs ‘Joker and the Thief’ and ‘Woman’ have earned the Aussie rockers a global following.

Singer-songwriter Pete Murray makes his Twilight debut on Friday February 7 with hits such as ‘So Beautiful’ and ‘Better Days’, and then members of some of Australia’s biggest rock bands (You Am I, Powderfinger, Jet Spiderbait) come together with the distinctively stunning voice of Linda Bull as the Australian Rock Collective (ARC) on Saturday February 8 to perform The Beatles’ classic album ‘Abbey Road’ in its entirety.

Valentine’s Day will see Bernard Fanning bring his distinct and celebrated songbook, followed by the rock energy of the Sunnyboys on Saturday February 15 as they celebrate 40 years since their inception with hits such as ‘Alone With You’.

Often described as a genre-defying singer and songwriter, Kasey Chambers will play the much-loved songs from ‘The Captain’ and ‘Barricades and Brickwalls’ on Friday February 21, before crowd favourite James Morrison Big Band returns on Saturday February 22.

Paul Kelly in Thirteen Ways to Look at Birds will bring together six musicians from broad-ranging backgrounds including James Ledger, Alice Keath and Seraphim Trio.  Performing bird inspired poems on Friday February 28, the show will educate us all on the protection of endangered birdlife which is a cause close to the hearts of both Taronga Zoo and Paul Kelly.

On Saturday February 29 the critically acclaimed ABBA tribute show by Bjorn Again will return for an incredible 18th year.

Mavis Staples will bring her Grammy Award winning and chart-topping soul to Twilight on Thursday March 5, and Meg Mac’s soulful voice will fill the amphitheatre on Friday March 6 with hits including ‘Roll Up Your Sleeves’ which is now close to hitting 20-million streams on Spotify.

Bringing the laughs to round off the series on Saturday March 7 is the Comedy Gala. A 15+ only show (parental guidance recommended for anyone under 15), the Comedy Gala will feature some of the best in Australian comedy including Kitty Flanagan, Randy Feltface and Luke McGregor.

Twilight at Taronga unites music-loving audiences who want to enjoy a unique and intimate performance setting with one of the best views in the world, so when you purchase your Twilight at Taronga ticket, you are automatically able to add on any of the following items to enhance your experience and make a night of it with a picnic and public transport: Chillazy, Picnic Rug, Classic Hamper, Premium Hamper, same day Zoo entry (adult $10, child $5) and return ferry ticket for 50% off the usual price.

As part of the 25-year anniversary celebrations, this year we are inviting Twilight visitors to come and experience Taronga Zoo’s brand new Wildlife Retreat by purchasing the ‘Twilight Wildlife Retreat Package’ that gives ticket holders first to access to the Twilight at Taronga lawns each night.

The Wildlife Retreat is a stunning new eco-retreat nestled within Taronga Zoo, overlooking Sydney Harbour. Stay in one of our 62 designer rooms and wake up to breakfast in our exclusive Me-Gal restaurant, which boasts some of the best views in Sydney. The Retreat experience includes two guided morning walks through the Zoo before it opens to the public to visit residents such as the Tasmanian devils, Red Kangaroos and rare Australian birdlife. Free parking and complimentary Zoo tickets are also part of the retreat package.

Our ‘Concerts with a Conscience’ approach promotes a message of sustainability across all parts of the event. We proudly focus on the Litter Free Oceans campaign that aims to protect our marine wildlife and oceans. Please help us stamp out single use plastics as we choose to re-use.

Saturday 7: Comedy Gala* 15+ (parental guidance recommended for anyone under 15)