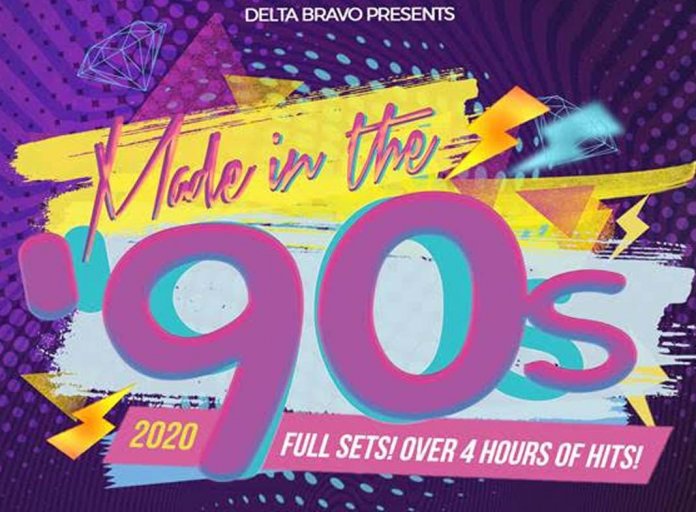 Update: Delta Bravo Presents regrets to announce that the Made In The ‘90s old school R&B festival, scheduled for 5-8 March, will be postponed to 24-28 June due to unforeseen scheduling difficulties. The great news is that the line-up will now boast a new mystery international act, which will be announced shortly, and which will make this line up one of the hottest old school vocal R&B line ups assembled in Australia and New Zealand in recent times. Fans will also enjoy an interactive concert experience bringing them even closer to the artists performing on stage.

The current line up remains intact and boasts artists responsible for some of the biggest R&B hits and anthems of all time.

With ‘90s nostalgia at an all-time high, it’s only fitting that the Made In The ‘90s concert receives a timely reboot in 2020 thanks to Delta Bravo Presents. Following two massive tours in 2011 and 2012, featuring the likes of ‘90s luminaries; Ralph Tresvant, 112, Jon B and Color Me Badd, amongst others, the 2020 edition promises a night of nonstop hits and massive old school love.

Heading the line-up is Grammy Winners, BLACKSTREET (“No Diggity”, “You Blow My Mind”) in their first ever Australian & New Zealand shows featuring their incredible band along with hitmakers NEXT (“Too Close”, “Wifey”), Grammy Winners ALL-4-ONE (“I Swear”, “I Can Love You Like That”) in their first Aussie shows in a decade and for their first ever Kiwi shows, R&B singer and producer, MARIO WINANS (“I Don’t Wanna Know”) in his first ever shows on our shores and RENEE NEUFVILLE, one half of the dynamic ZHANÉ (“Hey Mr. DJ”). On the local side, the line-up is rounded out by local R&B legends CDB (“Lets Groove”, “Hook Me Up”) in Australia and DJ REMINISE in New Zealand.  Hosting this spectacular trip down memory lane is none other than one of the voices of ‘90s R&B group 112, Q Parker!

Fans can expect full sets from all acts and over 4 hours of live R&B magic. Made In The ‘90s is back and an absolute must for any lover of the old school.