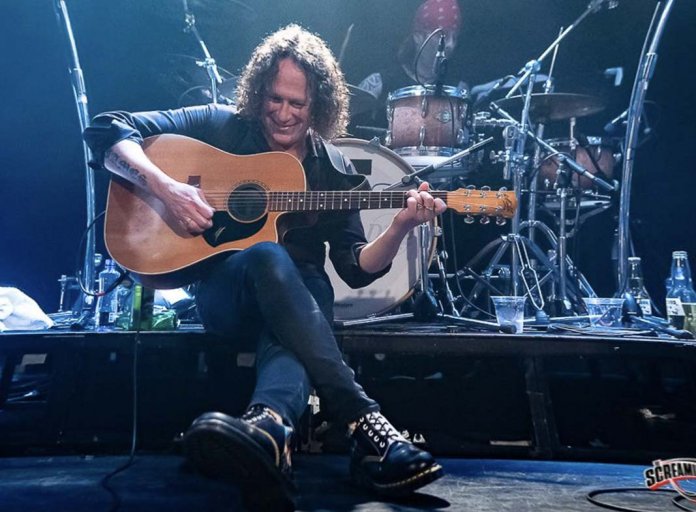 After 14 weeks of streaming from his remote Adelaide property and various breweries and wineries around Adelaide, Dave Gleeson and local guitarist mate Crafty have found a new home for their show and created a unique opportunity for Adelaide music lovers to spend their Sunday afternoons… iconic venue The Gov.

As South Australia opens up from recent COvid restrictions and celebrates over a month with no new cases, Gleeso and his merry band of musos are now delivering their weekly show in front of real audiences. As of July 1, over 100 people can now enjoy being in-house and front of centre with the frontman of two of Australia’s most beloved rock bands.

From humble beginnings of 1 table of 10 just 3 weeks ago, The Gov is now fully re-opened and reshuffling tables to hold up to 120 responsibly socially distanced music fans for Dave’s #streamingnotscreaming shows every Sunday at 3.00pm CST.

Gleeso is ecstatic to be back in front of real life living and breathing fans again! What started out as somewhat impulsive reaction to not being able to perform indefinitely, has become a musical journey of sorts for Gleeso. He explains, “It all started out as a simple idea to run a stream out of my backyard to keep me busy and out from underneath the family’s feet whilst isolating. Fast forward 3+ months and now I’ve got my own show at The Gov… living the dream it would seem…”

The weekly setlist knows no boundaries!  Starting with the obvious winners in the Angels and The Screaming Jets hits, Gleeso and Crafty have delved into a wide and unpredictable array of songs each week from Chuck Berry, Guns N Roses, The Beatles, to Australian Crawl, The Doors and Queen. As a  long-time fan of country music, Johnny Cash, Kris Kristofferson and Garth Brooks have also made regular appearances in the set, supported by, via his own admission, Dave’s ‘dodgy guitar playing’. Thankfully he’s been ably supported by local music legend Crafty and new recruit Athol Maxwell-Davis.

There’s never a dull moment with Dave Gleeson, long regarded as one of Aussie rock’s best frontmen. Social commentary abounds, along with song requests,  Joke of the Week, birthday shout-outs and mystery guest appearances, making this is an opportunity for lucky Adelaide music lovers to spend a quality Sunday afternoon with Gleeso and his mates and to support live music!  Here’s to heading back into the pubs and helping Aussie music get back on its feet again.

Whilst the stream remains available on Dave’s Facebook page, The Gov audiences will get their own value added private show once the cameras have been switched off  – with the boys continuing to play long into the afternoon…