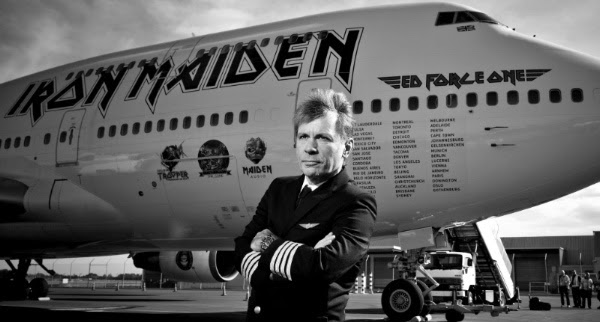 IRON MAIDEN singer, BRUCE DICKINSON, today announces a special one-man speaking tour of Australia this October to support his autobiography, What Does This Button Do? Delivering compelling excerpts from the book, slides and a Q&A, fans will finally get the chance to ask questions of the heavy metal icon in truly intimate venues. An Australian first, and a must for heavy music lovers, Dickinson will make five East Coast Australian appearances, including a night at Sydney’s Enmore Theatre on Thursday 18th October. Ticket purchasers will also receive a signed copy of the New York Times Best-Selling autobiography. See full tour dates below.

Bruce Dickinson is considered one of the world’s most storied musicians. Aside from decades spent delivering high-octane performances with his larger-than-life persona in Iron Maiden, Bruce has lived an extraordinary off-stage existence too. A true polymath, Bruce is, or has been, an airline pilot and captain, an aviation entrepreneur, a beer brewer, motivational speaker, film scriptwriter, twice-published novelist and best-selling author, radio presenter, TV actor and international fencer.

Over the last couple of years, during Iron Maiden’s The Book Of Souls World Tour, Bruce turned his unbridled creativity to writing his memoirs, longhand (in seven A4 notebooks no less). In What Does This Button Do? Bruce (a man who famously never gives interviews about his personal life) shares, for the first time, the most fascinating recollections, including his thirty years with Maiden, the early days, his childhood within the eccentric British school system, going solo, realising his dream of flying jumbo jets and his recent battle with tongue cancer.

Do not miss this unique opportunity to witness one of Rock & Roll’s most captivating icons when Bruce Dickinson tours Australia this October.

BRUCE DICKINSON | WHAT DOES THIS BUTTON DO? TOUR 2018