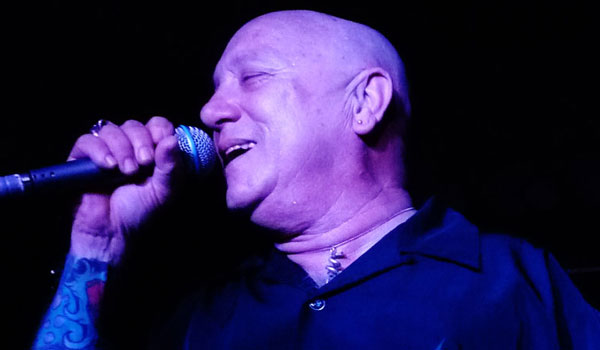 Aussie rock legend Angry Anderson AM will be inducted to the star-studded  ‘Elvis Wall of Fame’ at the 2015 Parkes Elvis Festival.

Frontman for the hard rock band Rose Tattoo, as well as songwriter, television presenter-reporter, actor and political activist, Anderson has been a stalwart of the Australian entertainment scene since the 1970s and will be attending the ceremony in person.

The ceremony will take place at 3pm on Wednesday 7 January 2015 at Kelly Reserve, Newell Highway, Parkes, and will be a free event marking the official start of the 2015 Parkes Elvis Festival.

Gary Stephen ‘Angry’ Anderson was born in Melbourne in 1947. Originally a fitter and turner by trade, Angry fronted the rock group Peace Power and Purity in the early Seventies before coming to prominence as lead vocalist with Buster Brown.

After relocating to Sydney in 1976, Anderson joined the newly formed Rose Tattoo, whose most popular single was ‘Bad Boy for Love’(1977). He led the band through six studio albums before it disbanded in 1987, at which time Anderson was the only remaining member from the early line-up.

In 1987 Anderson released his greatest hit, the power ballad ‘Suddenly’, which reached number 2 on the charts in Australia after it was used as the theme for Scott and Charlene’s wedding in Neighbours. It also peaked at number 3 on the UK Singles Chart in November 1988.

On Australia Day 1993 Anderson was made a Member of the Order of Australia for his role as a youth advocate, and in the same year Rose Tattoo regrouped to support Guns’N’Roses on the Australian leg of the Use Your Illusion tour before reconvening again in 1998 for their own Australian tour. In 2006 Rose Tattoo was inducted into the Australian Recording Industry Association (ARIA) Hall of Fame. Rose Tattoo finally disbanded in 2012.

Anderson has participated in and organised numerous charity events, aligning himself with charities involving handicapped children, drought-affected farmers, Cambodian landmine victims, and victims of the Bali bombings among others. Having seen cancer claim the lives of five of his Rose Tattoo bandmates, Anderson has also become an advocate for men’s health and appeared in a TV campaign promoting the awareness of prostate cancer. In 2013 and 2014 Angry led The Big Ride 4 Parkinsons, a charity motorbike ride from Sydney to Parkes for Parkinson’s.

In 2011 Angry was pre-selected as the Nationals candidate for the Division of Throsby in NSW under his birth name Gary Anderson. Despite not winning, his preference votes helped the Coalition with a 4% swing in the seat.

Anderson lives in the Sydney and is the devoted father of four children.

For all programming and ticketing information for the 2015 Parkes Elvis Festival, visit the new-look website at www.parkeselvisfestival.com.au.