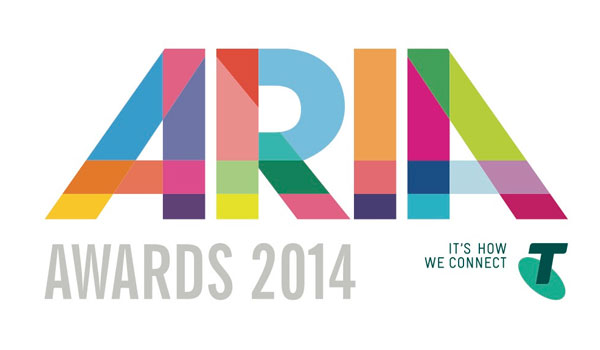 With less than seven weeks until the 2014 ARIA Awards Connected By Telstra, the Australian Recording Industry Association (ARIA) today announced the nominees in all categories, with the winners to be announced at The Star, Sydney on Wednesday, November 26, 2014.

This year’s ARIA Awards Connected By Telstra are supported by the NSW Government through its tourism and major events agency Destination NSW, Telstra, The Star, David Jones, Qantas and PPCA, and will be broadcast on TEN on Wednesday, November 26.

THE 2014 ARIA AWARDS CONNECTED BY TELSTRA – NOMINATION LEADER BOARD It was Nicholas Murphy’s, aka Chet Faker, moment to shine at the 2014 ARIA Nominations Event where he accepted his first ARIA Award as the 2014 ARIA Producer Of The Year. The Melbourne-based producer’s debut #1 ARIA album, ‘Built On Glass’, also received awards for ARIA Engineer Of The Year for Eric J Dubowsky and Best Cover Art designed by Tin & Ed. Chet Faker is leading the way at the 2014 ARIA Awards Connected By Telstra with nine nominations in total.  The nominations for ‘Built On Glass’ include Album Of The Year, Best Male Artist, Breakthrough Artist, Best Independent Release, as well as the publicly voted award Best Video for ‘Talk Is Cheap’ directed by Toby & Pete. Chet Faker’s label-mate, Flume (aka Harley Streten) is also nominated this year with Chet Faker for their single ‘Drop The Game’ in the Best Dance Release category.

Following close behind with seven ARIA Award nominations is Brisbane band Sheppard, who have been nominated in the Best Group category. They have celebrated a stellar year with their ARIA #1 single, ‘Geronimo’ being accredited 4x Platinum (280,000+ sales) and it is the longest running #1 single by an independent Australian artist. ‘Geronimo’ has been nominated in the publicly-voted categories Song Of The Year and Best Video (directed by Toby Morris). Sheppards’s ARIA #2 album, ‘Bombs Away’, has scored nominations in the following categories: Album Of The Year, Best Independent Release, Best Pop Release, as well as Stuart Stuart being nominated for Producer Of The Year.

ARIA Award winning, multi-Platinum, critically-acclaimed songwriter, recording artist, hit maker and now 2014 ARIA Best Female Artist nominee, Sia, released her sixth studio album ‘1000 Forms of Fear’ which promptly went on to debut at #1 on the ARIA Albums charts. ‘1000 Forms Of Fear’ has been nominated in the following categories: ‘Album Of The Year’, ‘Best Pop Release’ and ‘Best Cover Art’ designed by Sia. The lead track ‘Chandelier’ has become a multi-Platinum selling single, peaking at #2 on the ARIA charts, and is nominated in the publicly-voted category ‘Song Of The Year’. The video for ‘Chandelier’ , featuring 11 yr old ‘Dance Moms’ star Maddie Ziegler, has become one the defining videos of 2014. A massive viral hit with a multitude of parodies, it has now clocked beyond 200 million views via Sia’s Vevo and is a finalist in the publicly voted ‘Best Video’ category.

What a year this 2014 ARIA nominated Best Group from western Sydney has had! 5 Seconds Of Summer’s self-titled debut album, which is nominated in the Best Pop Release and Breakthrough Artist categories, debuted at #1 in countries such as Australia, Canada, Mexico, New Zealand, Italy, Holland and Ireland, and #2 in the UK and Sweden.  The album also debuted at #1 on the USA Billboard 200 with 253,000+ copies sold in its first week, making their album the biggest debut by an Australian artist ever in the Soundscan era.  The album follows their #1 single ‘She Looks So Perfect’ that went to #1 on the ARIA singles chart, as well as in the UK and NZ, and is nominated in the publicly-voted category Song Of The Year. 5 Second Of Summer’s May Australian tour  sold out in less than five minutes, and their 2015 Australian tour has sold out stadiums in both Sydney and Melbourne within days of going on sale.

2014 ARIA Best Female nominee Iggy Azalea has became a household name with her 2014 ARIA nominated Song Of The Year, ‘Fancy’ featuring Charli XCX, topping the charts, achieving 3x Platinum sales in Australia and reaching #1 on the Billboard Hot 100, a feat not achieved by an Australian female since Olivia Newton-John in 1981. The Clueless -inspired video has been viewed almost 300 million times and held the #1 spot for seven consecutive weeks on the Billboard Hot 100. Iggy Azalea’s debut album; ‘The New Classic’ reached #2 in Australia and Canada, #3 on the Billboard 200, and has secured ARIA nominations in the Best Urban Album and Breakthrough Artist categories.

Violent Soho has also scored four ARIA nominations for their ARIA Top 10 album, ‘Hungry Ghost’ including Best Group, Best Independent Release and the publicly-voted category Best Video for ‘Covered In Chrome’ directed by Dan Graetz. Violent Soho are also nominated in the publicly-voted category for Best Australian Live Act, having sold out two headline tours and becoming firm festival favourites after performing at Falls Festival, Big Day Out, Groovin The Moo and Splendour in the Grass in 2014.

Alt-pop maestro and 2014 ARIA nominated Breakthrough Artist Andy Bull’s latest album ‘Sea of Approval’ has been nominated in the Best Pop Category and Engineer Of The Year for Paul McKercher.

2013 ARIA Award winner Jessica Mauboy is back in 2014 with her ARIA Top 3, Gold selling album, ‘Beautiful’, which has been nominated in the Album Of The Year and Best Female categories. The album features the ARIA #2 double-Platinum single ‘Pop A Bottle’ and the Platinum-selling stunning ballad ‘Never Be The Same’, which has been nominated in the publicly-voted category of Best Video directed by Lawrence Lim.

John Butler Trio’s 2014 ARIA nominated Best Blues And Roots Album and #2 ARIA Gold-selling album, ‘Flesh & Blood’, remained in the Top 10 of the ARIA Chart for six weeks. Their ‘Only One’ video has received a publicly-voted nomination for Best Video directed by Ben Young. John Butler Trio has played most major festivals around the world in 2014, including Fuji Rock, Bonnaroo, Lollapalooza, Outside Lands and a sellout Australian tour in April 2014 making them very worthy of the publicly-voted Best Australian Live Act nomination.

Justice Crew blasted into the ARIA Singles charts debuting at #1 with their record breaking, four times Platinum-selling ‘Que Sera’, which has been nominated in the Best Pop Release category and the publicly-voted categories Song Of The Year and Best Video directed by Lawrence Lim. Que Sera remained atop the ARIA singles chart for nine consecutive weeks, making it the longest-running Australian #1 single since the ARIA Charts began.

2014 ARIA nominated Best Group, Sydney three-piece RÜFÜS’s album ‘Atlas’ debuted at #1 on the ARIA Album Chart and has gone on to be certified Gold as well as being nominated for Best Dance Release.  The band have played numerous festivals in Australia, toured throughout Europe and North America, and completed two sold-out national tours, the most recent of which has seen them play to 30,000 people across Australia and secured them a nomination in the publicly-voted Best Australian Live Act category.

Album Of The Year

The Audreys – ‘Til My Tears Roll Away (ABC Music/UMA)

The Bamboos – Fever In The Road (Pacific Theatre/Inertia)

Ja’mie – Learning To Be Me (ABC Music)

The Beards – The Beard Album (Independent/MGM)

Adam Brand – My Side Of The Street (ABC Music/UMA)

Nicky Night Time – Everybody Together (ONELOVE/Xelon)

The Presets – No Fun (Modular/Universal)