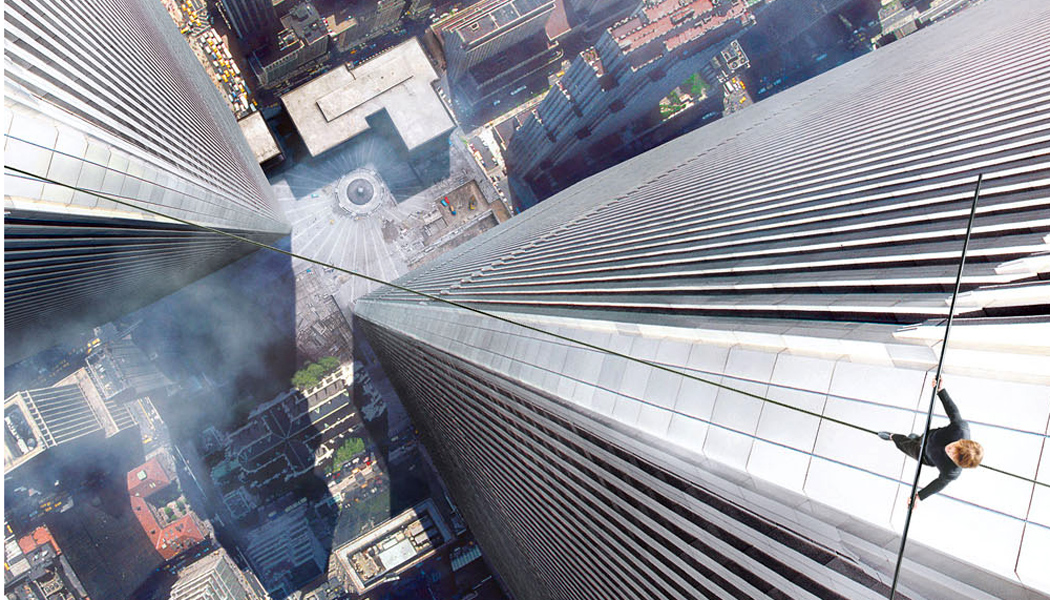 Breathtaking and adventurous, The Walk is a bang for the buck. Starring Joseph Gordon-Levitt and based on a true story, it explores the ambitious and daring Philippe Petit, and his dream of doing a high-wire walk between the Twin Towers. Directed by Robert Zemeckis, well-known for his work in Forrest Gump and Back To The Future trilogy, the filmmaker has applied himself exceptionally by fearlessly providing a unique cinematic experience to the table. He walks through the audience by providing an inspirational take to a man wanting to live out his dreams and never letting anyone stand in the way of achieving them.

The film follows Gordon-Levitt narrating the story and it’s interesting to see him take on a French accent. It’s funny because over a decade ago, he was undertaking the role as Cameron from 10 Things I Hate About You, which had him learn the French language to impress love interest, Bianca on the Taming of The Shrew adaptation. Compared to his work in the past, his character of Philippe had Gordon-Levitt play with such authenticity and passion for this film. After being kicked out of home by his father, Philippe ventures across the country by performing to bystanders and making a living for himself from his talent. During one performance, Philippe takes a bite of hard candy and ends up having to take a trip to the dentist. As he waits for his teeth to get examined, a magazine article with a picture of the Twin Towers catches his eye and he suddenly feels inspired to perform a high-wire walk between the two buildings.

Philippe then takes the chance to visit the circus that encouraged him to wire-walk as a child and secretly practices after-hours. He get’s caught in the act by senior circus performer, Papa Rudy (Ben Kingsley) and despite angering him, Rudy is impressed by Philippe’s juggling skills. Afterwards, Philippe meets a fellow street performer named Annie (Charlotte Le Bon) and they start a romantic relationship with one another, with Philippe claiming that she is his first “accomplice” for his dream. After some guidance and vital lessons from Papa Rudy, Philippe goes off to America with his accomplices and here he takes the opportunity to study the Twin Towers inside and out before the big day.

As a director, Zemeckis is a visionary filmmaker that shows ambition and integrity in his work. Not only is The Walk a vivid masterpiece but because of his flair in storytelling, as a viewer you begin to realise that many people go above lengths to accomplish something before they die. The cinematic experience in watching this film is earth-shattering because of the way it’s made, making you feel more involved during Philippe’s journey as a high-wire performer. You question his motives and his beliefs but one thing that stems from the screen is his fiery passion on finishing what he started. His dreams of walking between the Twin Towers was something he fell in love with and Zemeckis portrays this so genuinely on-screen. It’s fortunate enough that films such as The Walk bring encouraging feelings of hope and inspiration for those that lack any ambition to pursue anything in life. Although there were times where Philippe was bound to fail, as a viewer, you’d give Gordon-Levitt’s character the benefit of the doubt regardless of the circumstance. Furthermore, Gordon-Levitt brings a vibrant taste to the film with his superb acting skills, playing a well-respected person that has been a role model for creative performers worldwide. Also, Zemeckis working with Christopher Browne on the screenplay emphasised the creative and powerful teamwork behind the empowering tale to viewers alike.

Overall, The Walk is one of the best films you could ever encounter this year. It is a moving, adventurous and breathtaking story. Zemeckis has the ability to tell a story with heart, bringing the message that a dream is something attainable if we have the courage to believe it.