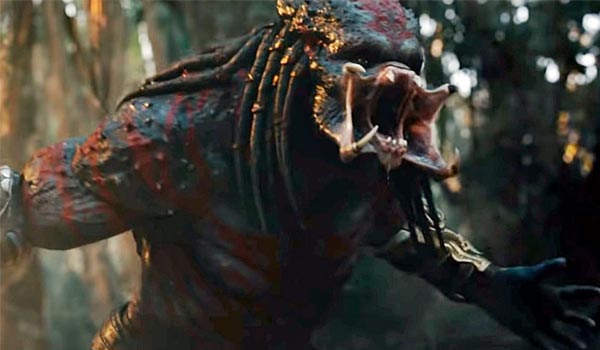 The Predator franchise skyrocketed the sci-fi genre into the pop-culture stratosphere, whilst simultaneously introducing the worlds to the deadliest beings in celluloid history. There have been some memorable moments throughout the franchise that have kept it teetering on the edge of sci-fi and horror, but there have also been some outright gory moments:

Any franchise fan or first-time viewer will fondly remember the first time they watched Predator as the bodies were discovered. In the first 15 minutes of the film Billy (Sonny Landham) looks up into the treetops and spots three bodies hanging from their ankles, completely skinned and dripping in blood. To make the moment even eerier they are surrounded by screeching birds, you might not witness the kill– but the unknown makes this one iconic.

Let’s look past the mud-covered glow-up of Arnold Schwarenegger and focus on the greatest action icon of the80’s, Dillon (Carl Weathers). He might not have made it to the end of the film,but he did die one of the most gruesome deaths in the franchise. Dillon has his arm blasted off, viewers witness the limbs fall to the ground still firing into the jungle, but thankfully it’s the 80’s and Dillon has a second weapon. With his right stump surging blood, he spins around to give his attacker the final blow, only have the Predator effortlessly spear him through the chest.

LA’s public transport system takes centre stage in Predator 2however it quickly becomes apparent it’s no-one’s regular commute. Cop Cantrella (Maria Conchita Alonso) is dealing when a near-mugging when the Predator makes itself known. Towards the end of the trauma Cantrell returns to the car only to find a pile of mutilates and grotesquely displayed bodies and the Predator. In a rare moment of compassion, the Predator lets Cantrella go after scanning her and realising she’s pregnant. Only to turn around moments later and rip her partner Lambert’s (Bill Paxton) head off and take the spine out.

Predator 2 might follow a misguided bunch of cops who believe they are tracking a vicious serial killed, but King Willie (Calvin Lockhart) the murderous leader of the voodoo underworld knows what they are up against. In true Predator fashion, before he has a chance to warn anyone other than Danny Glover, the Predator appears and smoothly beheads him before cleaning and buffing the skull to add to its trophy collection.

It might not be a Predator film, but this iconic death is still one of the most gruesome (and entertaining) in the franchise. Over a team dinner before our protagonists begin their journey home, Kane (John Hurt) begins convulsing. His encounter with one of the intergalactic creatures left him impregnated with an alien,which not only kills him, but erupts out of his chest cavity splattering his team with his intestines and blood. This is the moment franchise fans realised they would constantly be met by the unexpected.

The hunt continues, The Predator out now on 4K,Blu-ray, DVD & Digital