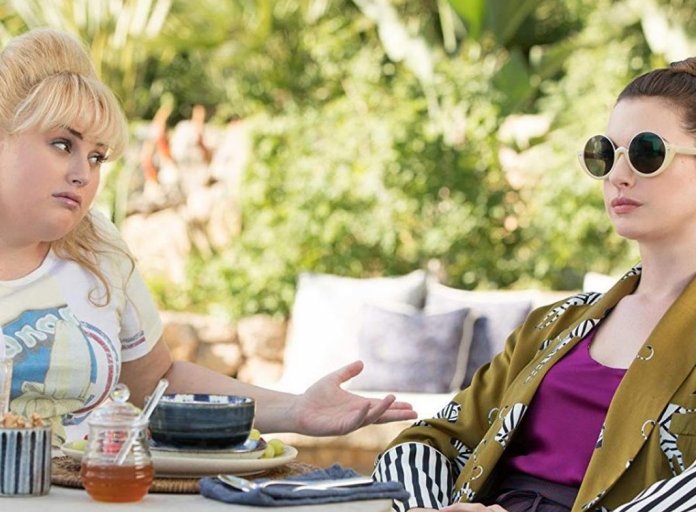 Thanks to Universal Pictures, we had the chance to see ‘The Hustle’ before its national release. This is our review of the movie, but as usual, no matter what we say, we still recommend you to go and see it at your local cinema because there is no better critic than yourself!

The Hustle stars Anne Hathaway and Rebel Wilson. The film is a “gender switch” remake of the 1988 film Dirty Rotten Scoundrels starring Steve Martin and Michel Caine. Hathaway and Wilson play con artists Josephine and Lonnie.  Josephine (Hathaway) a cultured upper class British woman uses her beauty and expertise to get men to give her money and riches whilst Lonnie (Wilson) a brash, loud mouthed Aussie uses alternate means. Both women want to operate in the sun kissed French Riviera, so they decide to compete with each other, aiming to con a young tech millionaire, with the loser having to leave empty handed. The Hustle’s glamorous, picturesque Mediterranean setting, coupled with the stylish clothes worn by Hathaway, create a lavish world for the audience to engage with. There are a few funny set ups in the film and some comedic one liners from Wilson, but not enough to sustain the plot. It is more glamour over substance.

Hathaway’s unrealistic British accent and caricature performance is one of the film’s letdowns. Anyone who witnessed Hathaway’s British accent in the film One Day knows accents aren’t her specialty. The character of Josephine is devoid of any comedic moments and Hathaway’s British upper class demeanour feels forced. Making one question why a British actress like Keira Knightley or Emily Blunt wasn’t cast or indeed why her character had to be British.

The plot is very thin and it appears that little creative effort has been put into the cons both women undertake. With a ninety-four-minute running time, the film rushes through the plot and characterisations, and is ultimately not a satisfying experience for the viewer. The current trend of the “gender switch” remake has not yet succeeded. None of this genre has been as well received as the original. The Hustle does nothing for empowering females in films. Simply switching gender roles seems more like a marketing strategy other than giving females legitimate agency.

The Hustle misses the mark. The film’s half baked plot and flat comedy make for a mediocre film, under-utilising the talents of Hathaway and Wilson.  Perhaps if the film had moved away from the original source material and made more daring decisions a more satisfying and entertaining film could have been made.