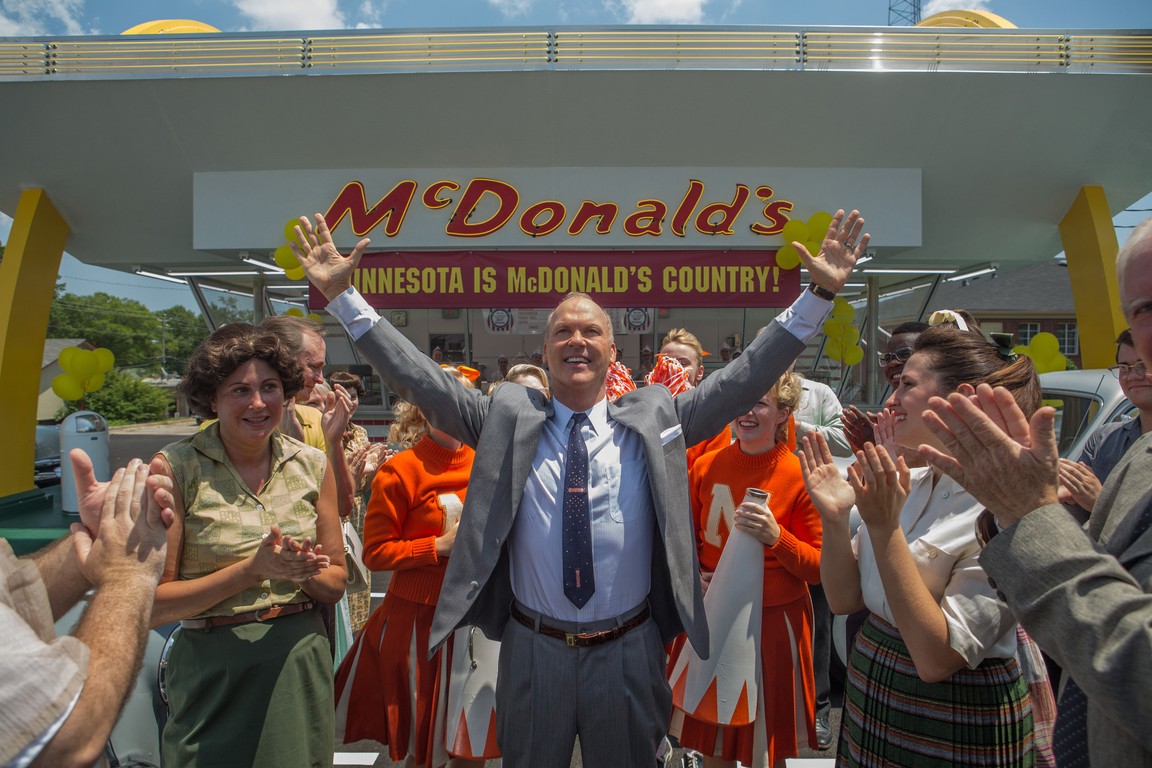 I went into The Founder screening at Village Roadshow Studios hungry, tired and quite weary from the day that was I just dealt. Whilst watching this film where the cheeseburgers were constantly being grilled to culinary perfection before my very eyes, I seriously felt that my critical thinking integrity was going to be seriously hampered by caveman hunger. But no, my biological drive to get nourished seemed to only complement the messages of greed and hunger that this film presented. It also made me lose my appetite for Macdonalds. The Founder (directed by John Lee Hancock) is the semi-biographical story of Ray Croc, a salesman who is the epitome of persistence in his line of work. One day, he comes across the Macdonald brothers and their little restaurant called Macdonald’s. The rest is history. Michael Keaton plays one of the sleaziest, most despicable businessmen you’ve ever seen on screen. But it’s not always that way. He’s struggling and trying hard to make his way in the world like many of us. When the going gets good in his franchising of Macdonald’s, there can be times where Kroc’s amazing, financially sound and profitable ideas are rejected by the brothers due to their conservative ideals. However, you will develop more emotion for the brothers than the protagonist ever will and that is one of the film’s major strengths and flaws in its execution. It definitely doesn’t seem to kill the distasteful stereotype of salespeople anytime soon.

In a world where anti-heroes in films and TV are at an all-time high, it can be said that Ray Croc definitely falls into such a category. However, unlike many other iconic protagonists that do appalling, selfish things, Keaton’s take on this ambitious salesman lacked a certain, dare I say… “je ne sais quoi” that made other iconic dirt bags like Frank Underwood still likable. Whether it is by Hancock’s direction or Keaton’s own take on the character, Ray Kroc’s portrayal of personality felt extremely aggressive with seemingly no restraint or subtly of his character as a whole. This came off as Keaton trying so hard to be Kroc that it’s like he’s hitting himself against a performance brick wall for sheer entrepreneurial magnetism rather than a holistic portrayal of the character that this whole films revolves around. It’s sometimes too overwhelming and one-dimensional ringing a certain hollowness to the drama that unfolds in the film. The Macdonald brothers should’ve got more screen time. It could then take a much more immersive drama route of reality-driven melancholy rather than the cold ascendence of this arrogant, heartless businessman.

A notable element in its prime is the editing of this film. The storytelling is shown with seamless progression with a sense of style and comedic effect that almost reminds me of the likes of Edgar Wright. When Richard (Nick Offerman) and Maurice (John Carroll Lynch) tell their story over dinner of how they got their MacDonald’s idea realized, the montage-esque recount of their highs-and-lows tales was an absolute blast to watch. It highlights the immense, gratifying high that all entrepreneurs seek in their quest to get their dreams realised, whilst showing some unexpected failures and hurdles that reality chucks within a moment’s notice. There is a human story to be had here at the beginning just like some of Hancock’s previous works. Keaton’s dynamic with his loyal wife played by Laura Dern seems to be one of the few missing links that felt a bit lacking in depth and somewhat tacked on. You definitely do feel incredibly sympathetic for the wife’s livelihood and love being oppressed by her husband’s egomania. Their relationship was a remarkable display of show and not tell in emotion, I just wish there was more of a resolution for her arc.

Like Deepwater Horizon, this film takes a semi-documentary route for the ending in order to give you a coda on what happens to the respective characters in real life. It was a great crucible to finish the film and certainly got some audible gasps and expressions of disgust from our critic audience. The Founder is a very worthy film to watch. It’s not perfect and seems to fall under the conundrum of not sure what type of film it is which was very prominent in this year’s releases. However, it contains comedy, themes and cold business douchebaggery that is very relevant in the weary world we live in today. Not to mention how the Macdonalds’ philosophy of family time and Maccas runs started. A noteworthy happy meal for the cinema.