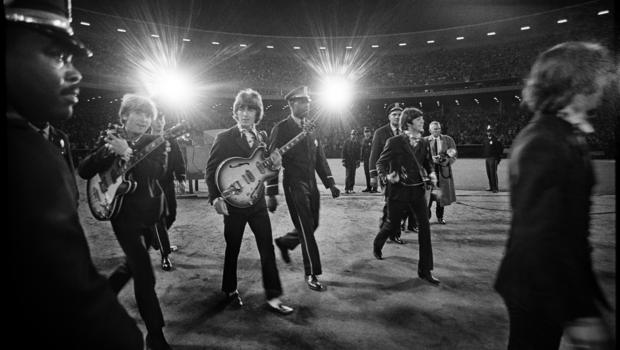 Thanks to Studiocanal, we had the chance to see ‘The Beatles: Eight Days a Week – Touring Years’ before its cinematic release. This is our review of the movie, but as usual, no matter what we say, we still recommend you to go and see it at your local cinema because there is no better critic than yourself!

Ron Howard has done some incredible films in his time but it’s not often we see an established director like himself transfer into the documentary format. Especially ones as ambitious as this. What could possibly be the longest documentary name I’ve ever heard: The Beatles: 8 Days a Week – The Touring Years takes you down a time travel of Beatles fanfare in the iconic band’s first tours to the States and beyond, whilst dealing with the grandeurs of their lifestyle and time period.

It features the talking heads of all the alive Beatles members to date plus many surprise guests including Whoopi Goldberg, Howard Goodall, and Sigourney Weaver, all talking about their own appreciation of the iconic British rock band. Seeing Ms. Weaver being the tough-as-nails Alien handler Ripley reduced to a die hard little fan-girl for The Beatles, was amusing to watch for all of us at the screening venue. One thing the film doesn’t shy away from is the gorgeously remastered footage of their touring concerts. They looked incredibly crispy and detailed in the retooled high definition conversion. Herein lies one of the film’s weaknesses – it dabbles too much like an MTV music video in the impulse to show all the hard worked converted footage of the Beatles’ concerts rather than continue on with the story, and that goes the same for the footage of all the fan girls.

The Beatles attracted an immense fangirl mania across the world. It is enchanting to watch how much these fans were crying, screaming and fainting in their cult-like admiration for the band which makes One Direction look like chump change. It is actually quite a marvelous bit of culture to be had, where this 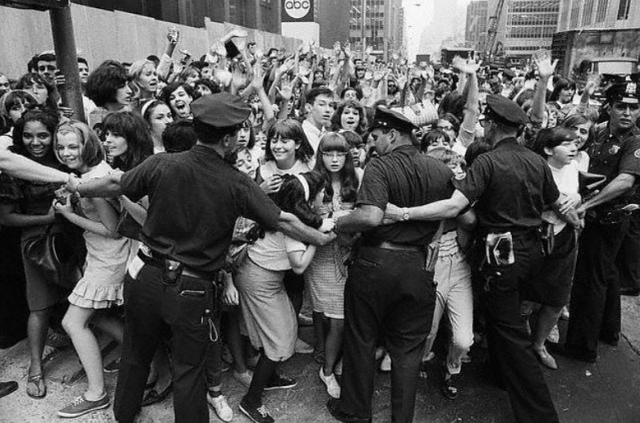 fandom goes so far as to create a state of anarchy against the police at many concert venues. It’s kind of hilarious to watch the seasoned police engage in a rugby-like tag chase on the field with many charging fans that broke through the first police wall to get their piece of that sweet, sweet Beatle whilst The Beatles continue playing live, humored and just feeling slightly awkward watching the madness before them. If there’s one thing this documentary wants to illustrate, it’s that Beatles culture, rather than the band itself. However, it is done just slightly too gratuitously where you just want to move on after seeing it again and again past the one hour thirty mark.

The film does not ignore the human side of the iconic musicians that make up The Beatles albeit not as deep and intimate as that other Beatles documentary. From the get go, Howard paints the innocent young spirits of the Beatles members and their down-to-earth personas juxtaposed to the big, wide world of elaborate media access and international superstardom.

Many historical events of the 60s whether it’s the Kennedy Assassination or the heavy racial tensions in the US at that time, have been neatly tied in with The Beatles movement. Though, some of these events were put in for inclusion’s sake rather than significance or meaning. Everyone from Paul to Ringo is likable and very humorous fellows, which is something that helps lend weight to the second half of the documentary where the band like many celebrated musicians, face the fatiguing plateau of constant tours and mass live attention.

The Beatles and their music contain many wonderful moments which will be treasured in the history books. That’s what the film will tell you. It won’t tell you the rise and fall of The Beatles. It won’t tell you how Yoko Ono came to their lives (though you do see her sitting by the side in a recovered footage which gives you goosebumps on what’s to come). If you don’t like The Beatles for any reason, this film will try to convince you otherwise. 8 Days A Week is an entertaining and insightful portrait into one of the most iconic bands in music history. However, despite clear goals in what it focuses on telling, its ambitious execution sometimes goes awry. You only wish to watch something with a little less flash and a little more soul.

The Beatles: Eight Days a Week – The Touring Years will be released in selected cinemas on September 16th!