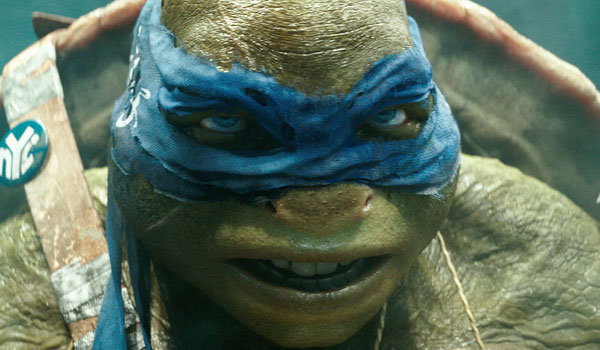 MAKE YOUR OWN TEENAGE MUTANT NINJA TURTLES INSPIRED PIZZAS! THERE’S ONLY ONE RULE:

To celebrate the release of Teenage Mutant Ninja Turtles in Australia on 11 September, we’ve collected some of the most important info you need to know about the turtle warriors… their signature pizza toppings, and their favourite pizza memories. Duh!

Start with a margherita base (cheese, basil and sauce)… And build a pizza based on your favourite Ninja Turtle! Which turtle topping will you choose: Leonardo, Donatello, Michelangelo, or Raphael?

If you want to impress Leonardo, the eldest and most disciplined turtle, make his dream pizza like he would expect his favourite pizza place, Battery Park Znapple.

LEONARDO
If you want to impress Leonardo, the eldest and most disciplined turtle, make his dream pizza like he would expect his favourite pizza place, Battery Park Znapple.

Favorite pizza memory: Ordering his own pizza, arranging the toppings in geometric patterns, and then meditating on it like it was a mandala.

DONATELLO
So you want to master the art of technospeak like Donatello? To get those brain cells moving, Donatello visits his favourite pizza place – Jungle Time Arcade, Pizza & Meatball. The know how to serve a mean purple style pizza.

Favorite pizza memory: Substituting real pepperoni with a vegan alternative he made in his lab. Everyone liked the vegan version better, except for Michelangelo, who thought it tasted like shoe leather. When Donatello asked how he knew what shoe leather tasted like, Michelangelo declined to comment.

MICHELANGELO
Cowabunga! Michelangelo loves living the carefree lifestyle, and therefore is not picky about where he gets his pizza… As long as it is fast!

Favorite pizza memory: Getting really wired on soda and making furniture out of all the empty pizza boxes he and his brothers were too lazy to throw away for the past ten years or so.

RAPHAEL
If, like Raphael, you get a bit aggressive when things don’t go your way, indulge in a red-coloured pizza! Raphael’s favourite pizza joint, Salvatore’s on 8th, knows how to handle this fiery customer.

Favorite pizza memory: Winning a pizza-eating contest against his brothers and then ordering a dessert pizza because he was still hungry.