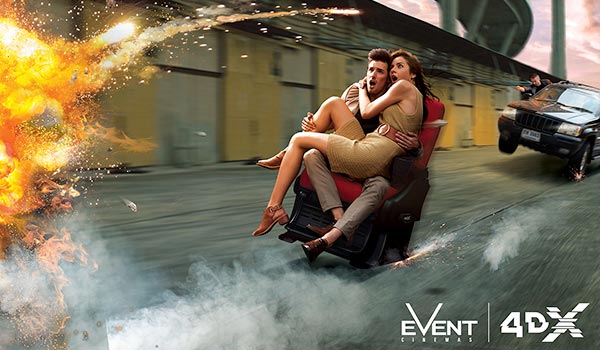 Luke Mackey, General Manager of Entertainment for Event Hospitality and Entertainment said, “4DX is the first and leading 4D movie technology in the world. It has been hugely popular internationally and at our Village Cinemas Century City site in Victoria, so we are very excited to bring Sydney its first 4DX Cinema at Event Cinemas George Street.

“For the first time, what is seen on-screen will be complemented by what you physically feel, smell and see inside the theatre. From the smell of fresh coffee to weather effects like rain, snow or roaring thunder and lightning, 4DX takes all the elements on-screen and immerses you in the world you’re watching.”

4DX at Event Cinemas George Street will not only be the first four-dimensional, 4DX cinema in Sydney, it will also be the largest 4DX theatre in Australia, bringing movie-goers full feature-length Hollywood blockbuster films on a whole new level.

4DX at Event Cinemas George Street will launch in October, with tickets on sale from tomorrow, Wednesday 26 September, at eventcinemas.com.au. Upcoming films screening in 4DX will include Venom, Fantastic Beasts: The Crimes of Grindelwald, Aquaman and Bumblebee.