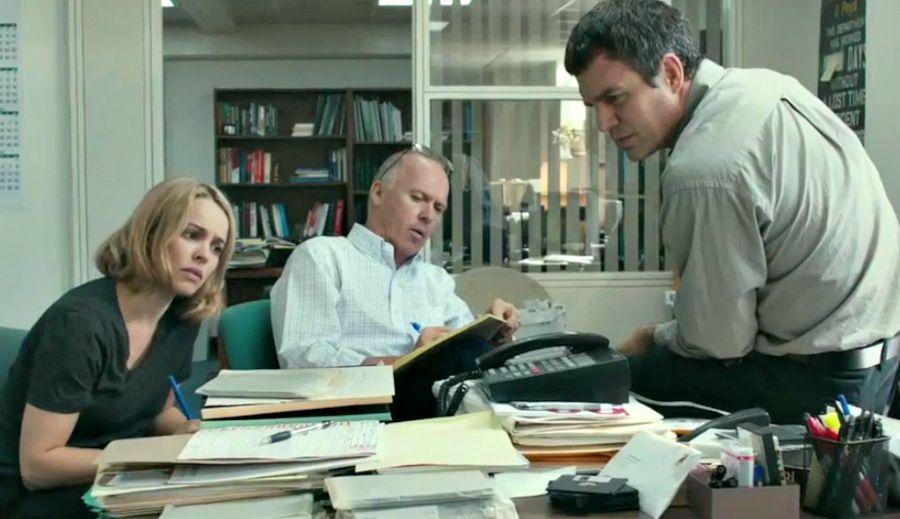 When it comes to the field of journalism, most people think it’s a profession where reporters ask annoying questions to everyday people – including the famous – on what’s happening in their life and how a particular event impacts them in some way. What you see in investigative journalism, especially on Australian television, with shows like Sunday Night and A Current Affairs, you mainly witness ridicule by people and journalists chasing those who have been accused as frauds and thieves. But what happens if the story that you create reaches out to the people who have been suffering the most?

Directed by Tom McCarthy (The Station Agent, The Visitor), Spotlight is a very eye-opening, dramatic and heart-wrenching film which depicts the true story of a team of journalists who work for newspaper publication, The Boston Globe  who publish a groundbreaking story. Set back in 2001, the publication hires new editor, Marty Baron (Liev Schreiber). He finds out that Walter “Robby” Robinson (Michael Keaton) is head reporter of the “Spotlight” team which consists of Michael Rezendes (Mark Ruffalo), Sacha Pfeiffer (Rachel McAdams) and Matt Carroll (Brian d’Arcy James). Baron reads an article in a small column on pedophile priest, John Geoghan being accused of sexually abusing children and how the Cardinal Law (The Archbishop of Boston) did nothing to stop him. He then urges the Spotlight team to investigate and find the story behind it.

If there’s one thing that I admire about this film is the passion and integrity all the journalists had when it came to breaking the story. Despite research being difficult and strenuous, the reporters had purpose to write a story that mattered – to the people and most importantly, to themselves. With McCarthy’s background in as a director, Spotlight is honestly one of his best films to date.

Ruffalo in particular was strong in his role with Keaton being superior and dedicated to his character of Robby. The solid acting by the main cast brought the story to life and you could feel the authenticity from the script on-screen. Although the film started slow at first, there was a huge build-up as it progressed even further, making its journey an exhilarating and downright terrifying one.

It’s amazing how one story can create such an impact for people, especially stories which are the most controversial. Spotlight showcases a pressing issue that was dealt with fifteen years ago and it’s something you wouldn’t expect from Catholicism. That being said, you need to be open-minded when it comes to watching this film as what it deals with isn’t exactly comfortable for the average viewer. Spotlight is a film that is intimidating but at the same time informative because what it reveals is the truth. The truth of how a story can change people’s lives by reporters who simply care.

Spotlight was shown in last year’s Adelaide Film Festival. Its Australian release date is on January 28.