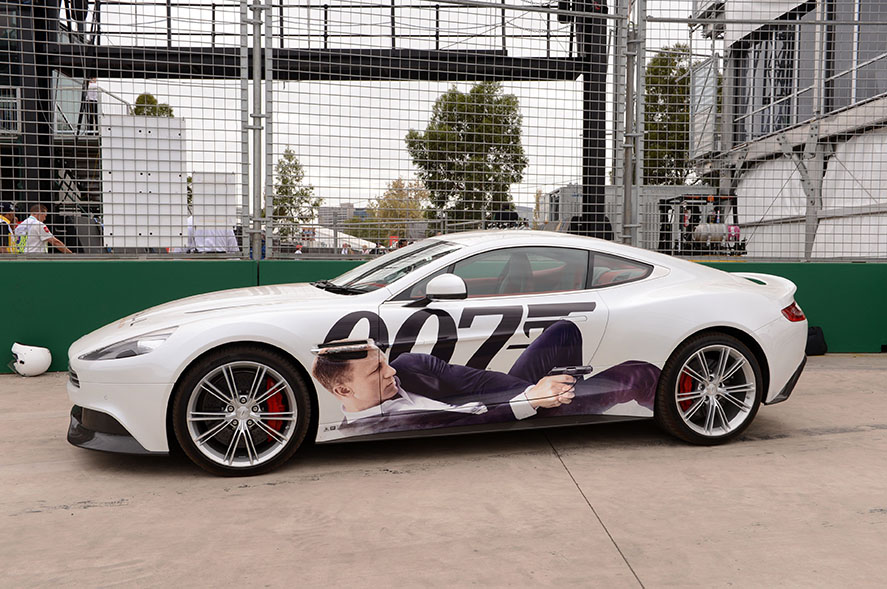 As the 2013 Formula 1®Rolex Australian Grand Prix kicked off in Melbourne today, all eyes were on 007 as a customized SKYFALL Aston Martin Vanquish was unveiled to celebrate the film’s home entertainment release. SKYFALLis released on Blu-ray and DVD on Wednesday 27 March from Metro-Goldwyn-Mayer Studios, and Twentieth Century Fox Home Entertainment.

The bespoke Aston Martin features iconic imagery from the most successful film in the James Bond franchise, including the famous 007 insignia. Bringing some Bond style to the track, the SKYFALLVanquish performed a hot lap of the Albert Park circuit with V8 Supercar legend Cameron McConville behind the wheel.

SKYFALL continues to break records as sales figures show that SKYFALL has become the biggest selling Blu-ray of all time in its first week of release in key international markets. This run of success looks set to follow in Australia when SKYFALL launches on Blu-ray and DVD on March 27th.

Directed by Oscar® winner Sam Mendes and starring Daniel Craig as James Bond, SKYFALL’s home entertainment release follows the phenomenal theatrical success of the 23rd installment of the longest-running franchise in film history. The film won the BAFTA [British Academy of Film and Television Arts] for ‘Outstanding British Film’ and Adele’s “Skyfall” theme song triumphed at the BAFTA’s as well as ‘Best Original Song’ at both the Golden Globes® and the Academy Awards®