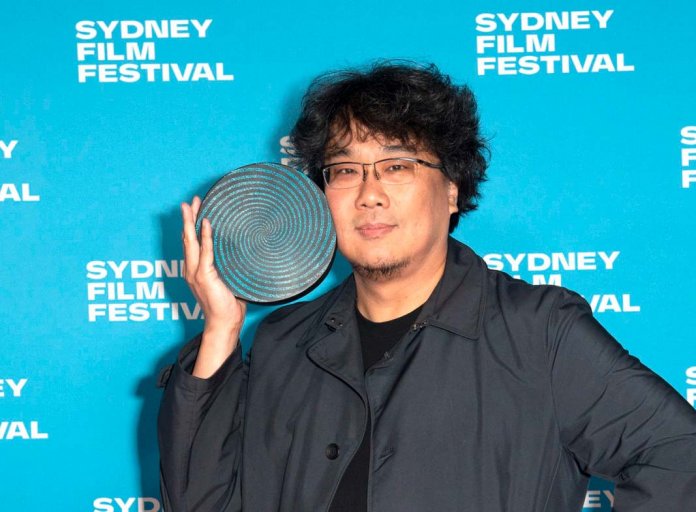 Fresh from winning the biggest prize at Cannes, the renowned Korean director was awarded Sydney Film Festival’s prestigious top prize (and $60,000 cash), competing with a selection of 12 Official Competition films.

“This Festival is really amazing, especially the audience…really special and extraordinary,” Director Bong said, accepting the award at the State Theatre. “This is the most meaningful prize for me – in this beautiful city and beautiful theatre, and one of the most beautiful audiences in the world.”

Indigenous director Erica Glynn was awarded the Documentary Australia Foundation Award for Australian Documentary‘s $10,000 cash prize for She Who Must Be Obeyed Loved, a celebration of the life of her mother, the trailblazing Indigenous filmmaker Alfreda Glynn.

Charles Williams took out both the $7000 cash prize for the Dendy Live Action Short Award, and the $7000 Rouben Mamoulian Award for Best Director, in the Dendy Awards for Australian Short Films, for All These Creatures, which also won the Short Film Palme d’Or at Cannes. The $5000 Yoram Gross Animation Award went to Lee Whitmore’s Sohrab and Rustum.

The Event Cinemas Australian Short Screenplay Award, a $5000 prize for the best short screenwriting, was awarded to Michael Hudson and Ties That Bind, for its narrative simplicity and complex perspective on family violence. Victoria Hunt’s film Take received a Special Mention for its weaving of found material and dance into a powerful story about the repatriation of stolen Indigenous art.

The $10,000 Sydney-UNESCO City of Film Award, bestowed by Create NSW to a trail-blazing NSW-based screen practitioner, went to Darren Dale and Rachel Perkins of Blackfella Films, with Deborah Mailman presenting the award to filmmaker Rachel Perkins.

Don’t forget to vote for your favourite feature film and documentary in the Audience Awards, the people’s choice awards of SFF, recognising the most popular films at the Festival.

You can vote for every film you see using the iPhone and Android apps, and at sff.org.au. Your vote puts you in the draw to win a night for two at the PARKROYAL Darling Harbour. Voting closes at 5pm today (Monday), and the winners are announced on Wednesday 19 June.

Congratulations to all of the winners and all of the finalists! And our thanks to you, the audience, for making this the biggest Sydney Film Festival ever – we look forward to seeing you in 2020 for another huge Festival!