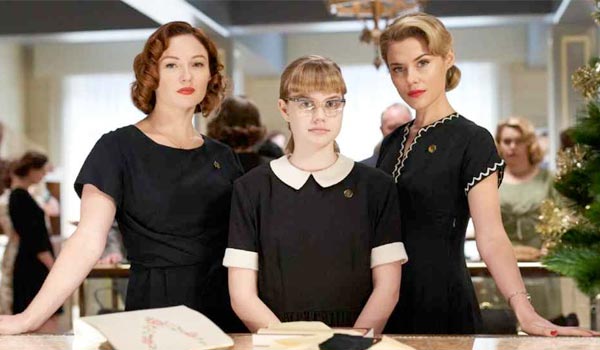 With just five weeks until the 2018 AACTA Awards presented by Foxtel, anticipation surrounding the nation’s top screen awards increased today when the Australian Academy announced the nominees in all categories.

The winners will be announced at the two major 2018 AACTA Awards presented by Foxtel events, held at The Star Event Centre in Sydney, home of the AACTA Awards: The Industry Luncheon on Monday 3 December, and the AACTA Awards Ceremony on Wednesday 5 December, telecast on Channel Seven with encore screenings on Foxtel. Tickets to both events are on sale now from www.aacta.org/whats-on.

The 2018 AACTA Awards mark the 60th Anniversary of AFI | AACTA, giving the Australian Academy and the screen industry the opportunity to celebrate its incredible history, talented practitioners and world-class productions.

In another record-breaking year, a total of 19 feature films have received nominations, with five films competing for the highly coveted AACTA Award for Best Film presented by Foxtel: BOY ERASED, BREATH, CARGO, LADIES IN BLACK and SWEET COUNTRY.

Leading individual nominations are Joel Edgerton (BOY ERASED) and Simon Baker (BREATH), who compete in four categories: Best Film, Best Direction, Best Adapted Screenplay and Best Supporting Actor. Not only does this mark first-time production and direction nominations for the AFI and AACTA Award-winning auteurs, it also marks the first time in AFI | AACTA history that an individual has been nominated in both direction and acting categories in the same year.

Egderton and Baker compete for Best Direction alongside two past category winners; Cannes Golden Camera Award winner Warwick Thornton (SWEET COUNTRY), and two-time Oscar® nominee Bruce Beresford (LADIES IN BLACK), whose nomination marks his seventh Best Direction nomination, tying him with Paul Cox for the most nominations in the category.

Emmy winner Julia Ormond receives her first AACTA Award nomination for LADIES IN BLACK, while Oscar® nominees Lucas Hedges and Rooney Mara follow past recognition at the AACTA International Awards with nominations for their performances in BOY ERASED and MARY MAGDALENE, respectively.

Also receiving nominations for BOY ERASED are Oscar® and multi-AFI and AACTA Award winners Russell Crowe and Nicole Kidman, who is vying for her second consecutive Best Supporting Actress win.

SWEET COUNTRY’s Hamilton Morris and Natassia Gorey-Furber both receive nominations for their acting debuts, while Daniel Monks receives a Best Lead Actor nomination for his feature film debut in PULSE.

Feature films BREATH and SWEET COUNTRY are nominated for the inaugural AACTA Award for Best Casting presented by Casting Networks alongside television mini series’ FRIDAY ON MY MIND and RIOT.

Oscar® nominee and eight-time AFI and AACTA Award winner Judy Davis – who currently holds the record for most wins across performance categories – receives her first nomination in a television category for MYSTERY ROAD.

GURRUMUL and MOUNTAIN lead nominations in the documentary categories with five each, both receiving nominations for Best Feature Documentary alongside GHOSTHUNTER, JILL BILCOCK: DANCING THE INVISIBLE and WORKING CLASS BOY.

Nominated for Best Documentary or Factual Program are: AFTER THE APOLOGY, EMPLOYABLE ME, HAWKE: THE LARRIKIN AND THE LEADER, THE QUEEN & ZAK GRIEVE and YOU CAN’T ASK THAT.

“AFI | AACTA has been celebrating our industry and its immense talent since the first AFI Awards in 1958, where ten awards were presented. 60 years on, we have 395 individuals from 105 productions competing for a total of 54 Awards, recognising excellence across all industry sectors, including feature film, television, documentary, short film, online, visual effects and animation,” said AFI | AACTA CEO Damian Trewhella.

“We’re thrilled to see such a wealth of screen talent recognised at this year’s Awards – from some of the earliest AFI Award winners to many emerging and early-career practitioners – and we look forward to celebrating their fine achievements, as well as our 60th Anniversary as the longest standing national screen culture and industry development organisation at the 2018 AACTA Awards presented by Foxtel in Sydney.”

NSW Minister for the Arts Don Harwin said, “The NSW Government has a strong commitment to the State’s screen industry and is proud to support the AACTA Awards in Sydney. This year’s nominees reflect the exceptional talent and success of the Australian film and television industry and I congratulate them on their achievements – particularly those from NSW.”