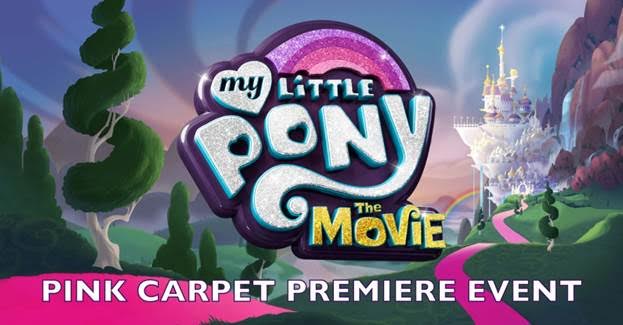 Everyone’s favourite ponies are coming to the big screen in an all-new movie and you can walk the PINK carpet at the Australian premiere.

Featuring the voices of Emily Blunt, Sia, Liev Schreiber, Kristin Chenoweth, Zoe Saldana, Taye Diggs and Uzo Aduba, the story is about the Mane 6, who go on a journey to the end of Equestria when Ponyville is threatened by a dark force. Determined to save their home, along the way they meet new friends and embark on exciting adventures across magical mountains, undersea worlds, and even a board a flying pirate ship.

Tickets are available to purchase from HOYTS Cinemas and include entry to the Canterlot Friendship Festival and entertainment by the Ponyville Performers; My Little Pony Character Meet & Greets; “Pony-fication” station activities, including fanciful face painting, My Little Pony-inspired hairdos and sparkly temporary tattoos; photos in Pinkie Pie’s Photo Booth; and a free My Little Pony: The Movie Blind Bag collectible.

Book your tickets here to be part of this magical movie experience.

About the film
A dark force threatens Ponyville, and the Mane 6 – Twilight Sparkle, Applejack, Rainbow Dash, Pinkie Pie, Fluttershy, and Rarity – embark on an unforgettable journey beyond Equestria where they meet new friends and exciting challenges on a quest to use the magic of friendship to save their home.

Madman is releasing MY LITTLE PONY: THE MOVIE in cinemas nationwide on November 2, 2017.