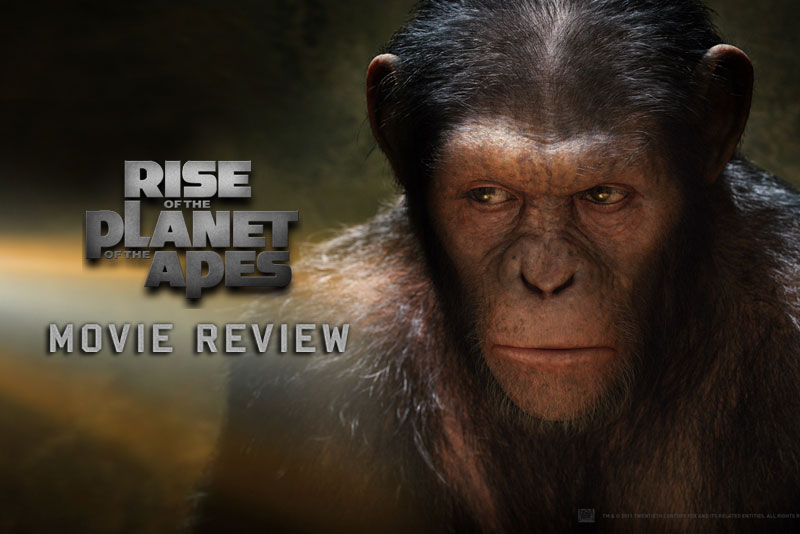 Thanks to Fox, we had the chance to see director Rupert Wyatt’s ‘Rise of the Planet of the Apes’ before its Australian cinematic release. This is our review of the film – but as usual – no matter what we say; we recommend that you still go to your local cinema and see the film; because: There is no better critic than yourself!

‘Rise of the Planet of the Apes’ follows the story of Will Rodman (James Franco); a scientist who is trying to find a cure for Alzheimer’s disease – by altering the genes in Chimpanzees he is trying to see if intelligence can be manufactured (and thus used to cure disease) – or if it is indeed genetical.  His initial experiments within this genetical engineering provide good results – but once the original test subject causes complications (a female ape escapes; creating chaos) the project gets closed down.

The people funding Rodman’s science experiments attribute the success of them to the chimps aggressive behaviour – they then give the order of put all the apes down. During the clean up Rodman finds a major surprise: a baby ape is in the original test subject’s cage – showing that the mother was only over protecting her child, hence the aggressive behaviour.

Rodman decides to save and adopt this baby ape – which he names Caesar – all to further his (now closed down) science experiment: to find out if the ape will develop a high-level of intelligence transferred directly to him from his mother. After seeing much improvement in Caesar’s intelligence: Rodman starts to raise him inside his own home: becoming a father figure for Caesar; all while doing tests on him.

Rodman has a huge reason to continually work (unofficially) for an Alzheimer’s disease Cure: his father (played by John Lithgow) is suffering badly from it. Rodman tested an early version of the cure on his dad, and it proves the effectiveness of the original project.

Through Rodman’s journey (after Caesar gets injured and after the chimps escapes from home for the first time) he falls for Caroline Aranha (Frieda Pinto); a veterinarian who works for the Zoo. They begin a long-term relationship and she helps him raise Caesar; who soon grows up into another family member. He communicates with everyone through sign language (his skills improve every day). 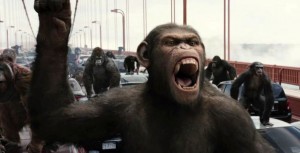 The cure led to a major improvement in Rodman’s dad health, but unfortunately an incident occurs (which you can see in the film’s trailer). The incident is violent and results in Caesar being put inside an Apes reserve facility; administrated by John Landon (Brian Cox). The place is far from his human family, but he soon begins interaction with the other Apes; eventually becoming their leader (especially after Caesars attacked by the bully that is Landon’s son (curiously named Dodge Landon, a name that will sound familiar if you are a fan of the original 1968 ‘Planet of the Apes’). This character, played by Tom Felton, works as one of the Ape keepers; and he treats the animals with cruelty.

‘Rise of the Planet of the Apes’ really surprised us – in a very positive way – especially because before the release; there were so many concerns about whether doing a prequel/reboot of a classic (with so many details to take care of) would work.

However, the film with has a great (and simple) storyline; which is well organised and rich in character. After the first few minutes on-screen we lost all of our concern.

One of the best things – which is the obvious thing – is that the film centers on the Apes. They are the protagonists for pretty much the entire film. The human characters are more like extras used only to link some things around (Michael Bay: Please learn from this!).

The undisputed protagonist is CGI generated: Caesar. He is played by Andy Serkis. Serkis is a very experienced and versatile actor; who also has motion capture experience – famously for playing Gollum in ‘Lord Of The Rings’ – and King Kong Himself in Peter Jackson’s ‘King Kong’ – Serkis does an extraordinary performance.

The CGI work is done by Weta Digital, and is so far the very best job I’ve ever seen in the area – which isn’t a surprise at all considering that the team was behind flicks such as ‘Lord Of The Rings,’ ‘King Kong’ and the upcoming ‘Adventures Of Tin-Tin.’ 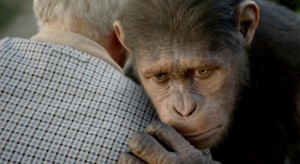 The textures, the lights…everything looks so real. You forget you’re in front of a computer generated character, and that makes you feel what the character feels: you suffer with him, you get totally immersed in his facial expressions, and the entire time you’re actually caring about it. This CGI has heart, and there is no question about it: we are pretty sure we have an Oscar Winner in front of us.

But is not only Caesar on-screen that impresses; because there are plenty of Apes around. Each one digitally made and each one made with such a care for detail that you get different personalities – it all gets you stuck in your sit; wondering if any of them is a character you know from the old films (and we are sure you will find a couple of them around) -after some minutes (even if their names are not immediate) you will know who they are.

Action is not absent in this film. The last half an hour acts as an epic sequence: with Apes (commanded by Caesar) everywhere! All trying to escape and fight for their survival – but not a way you’ve seen in the old films: because these apes are just starting to develop their intelligence and “They just wanna go home.”

You will find a lot of references to the old films in the film – especially if you care about the small details and the ‘symbols.’

The film is so good that it feels short. There is so much going on that you won’t believe the film is almost two hours. And when it’s over and you’ve seen the poetic final scene. The scene that makes you feel that the Apes will rise – you’ll just feel that there has to be another film for sure.

‘Rise of the planet of the Apes’ keeps the essence of 70s sci-fi alive in modern cinema. It has world-class special effects, amazing CGI characters, a great plot, heart and action. It’s definitely more than what we expected: A superb film that you must watch!

‘Rise of the planet of the Apes’ opens August 4 in Australian Cinemas.