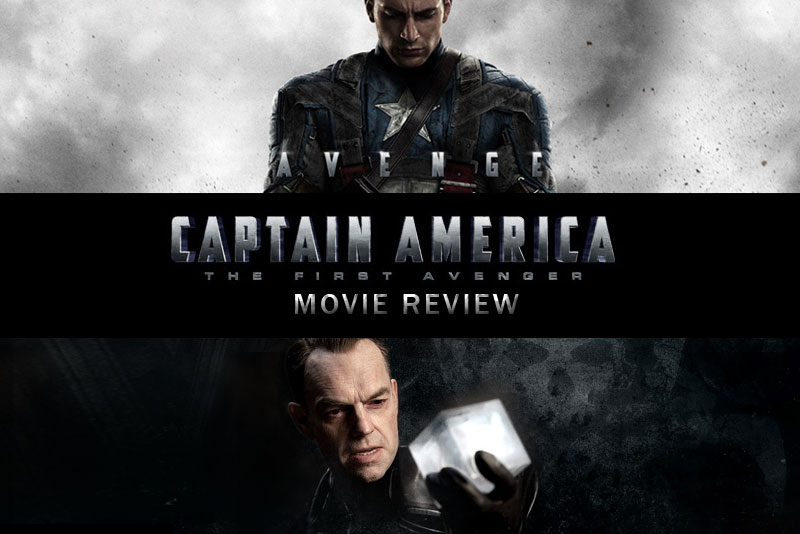 Thanks to Paramount pictures we had the chance to see Joe Johnston’s ‘Captain America: The First Avenger’ a couple of days before the film’s release in Australian cinemas. This is our review of the film – but as usual – no matter what we say; we recommend that you still go to your local cinema and see the film; because: There is no better critic than yourself!

‘Captain America: The first Avenger’ is the last Marvel comic book big screen adaptation. Following the success of ‘Iron Man,’ ‘Hulk’ and ‘Thor;’ ‘Captain America: The First Avenger’ tells the story of one of the first Marvel characters: Steve Rogers (played by Chris Evans), who – due to his poor physical conditions- gets his many army applications rejected. His enlistment is soon helped by Dr. Abraham Erskine (Stanley Tucci). 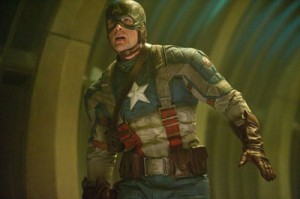 After some “tests,” Rogers volunteers to participate in an experimental program that turns him into the Super Soldier known as: Captain America. Created to defeat the Nazi Menace commanded by Hydra; a secret scientific division commanded by the evil Johann Schmidt (Hugo Weaving), who is using science and divine power to create the ultimate weapons, all to hold a new world order under his reign.

When Chris Evans was casted as the first avenger; the major concern among the Marvel fans was related to his previous job: playing Johnny storm in the ‘Fantastic 4’ films. How could the same actor play two beloved marvel characters? (With Captain America being the more iconic one). However, after having seen Captain America, we can now say that nobody will remember Evans as Johnny Storm: because his performance as the First Avenger is absolutely flawless. Evans is born for the role – showing a different side of his acting range – which is far from his previous roles. He’s now performing in a mostly serious way, you feel the weight of the character 100%.

The film is directed by Joe Johnston, who takes care of every single detail from the comic books as well as the period 50’s setting – there is such strong art direction behind it all. The job is so well done that it gives the spectator the sensation of reading/seeing an original Captain America comic book in motion.

The costumes are perfect. Not only the Captain America ones – but every single dress, hat and uniform was made distinctive. There is so much tribute being paid in the film; even from the very first costume that Rogers wears in battle, right up to the last one he wears. They even reference the old Captain America suits from previous film adaptations such as Elmer Clifton’s ‘Captain America’ (1944) and the 1990’s version by Albert Pyun.

But the film is not only about Steve Rogers. There’s also some outstanding performances from Tommy Lee Jones, Stanley Tucci, Dominic Cooper and the gorgeous Hayley Atwell.  Jones plays the role of Colonel Chester Phillips, and the role suits him perfectly: like a grumpy old general who always knows how to say the right line at the right time. His ironic way of speaking will put more than one smile on your face.

Stanley Tucci, gives us heart – and a lot of it. Ht reminds us of a grandpa who wants to protect us. For that reason he works as the one behind the creation of The First Avenger; making us feel a lot for the character in the short time that he spends with Rogers. Tucci acts like a father figure of sorts for Rogers.

Dominic Cooper plays Howard Stark (Tony Stark/Iron man’s dad), and is so similar to the Downey Jr. character (almost in every aspect) that you can’t avoid comparing to (or even think that it is) Robert Downey Jr performing right then and there. Stark gives us a few funny moments and some epic comic book scenes, both which will amaze the Marvel fans: such as the first World Expo, or when he shows off the prototypes of Captain America’s shield.

Hayley Atwell plays the love interest of the Captain: Peggy Carter; an English officer who knows how to punch bullies and uphold her ideals of liberty. The best thing about the relationship between Carter and Rogers; is that there it’s not a cheesy (read: typical) romantic relationship – and the romance stuff is minimal in the film. There’s just seconds to show it and thankfully they save the rest of the space for the action – and this is really what everyone wants to see. 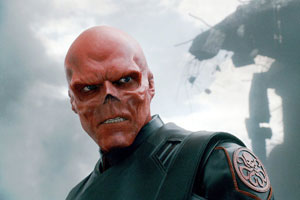 The last thing on the list we want to talk about is Hugo Weaving; who plays the villainous role of Johann Schmidt: better known as The Red Skull. Weaving shows once again why he is a world class actor who can perform in any kind of role (and this is a very hard one to play). In spite of the complexity of the character – and the pain of Weaving having to deal with the special effects makeup for almost the entire film – he still delivers a great character. He has a German accent and extends to us so many of the facial expressions that are a signature of this marvel villain. One of the best things about the Red Skull character is that it isn’t done in CGI at all…it was all practical makeup; a risky move that worked perfectly, all thanks to a great actor.

Obviously action is not absent in the film; there is tons of it! The special effects are great, one need only think of the moments where the American Hero trows his shield exactly as he did in the comic books, or moments of Red Skull shooting his rivals, and sometimes even his followers.

The musical score by Alan Silvestri works great in the film. There are some very clichés American motifs and touches – but it works. Some of Silvestri’s instrumental music during the action and dramatic scenes even reminded us of parts of the ‘Predator’ score.

The only small issues of the film are some lines spoken at the end. They are quotes not really as strong as those said during the previous parts of the film.

The 3D technology seems to be really unnecessary, moreover, it is almost imperceptible most of the time. But you know, there’s so much going on that you eventually forget you are wearing 3D glasses.

‘Captain America: The First Avenger’ may be the best movie of the Marvel franchise so far. It has everything in it: amazing action sequences, a great cast and story. It’s a perfect link to the upcoming ultimate superhero film:‘The Avengers’ – which will give the public a full on Marvel experience.

‘Captain America’ is definitely a must watch film, and you have to remember to stay until the end of the credits: in order to become doubly amazed and to scream: ASSEMBLE!

‘Captain America: The First Avenger’ is out now. Only in cinemas.