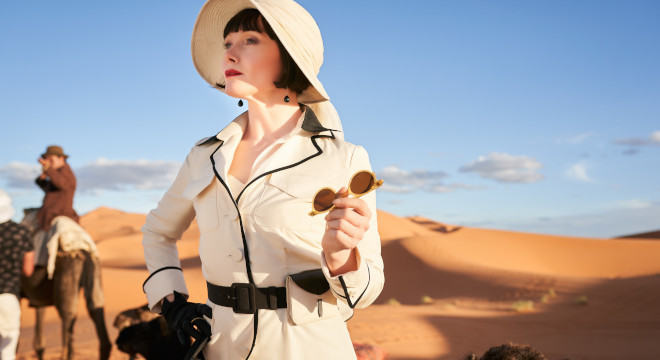 Thanks to Road Show Films we had the chance to see ‘Miss Fisher and the Crypt of Tears’ before its national release. This is our review of the movie, but as usual, no matter what we say, we still recommend you to go and see it at your local cinema because there is no better critic than yourself!

Miss Fisher and the Crypt of Tears brings the Miss Fisher Murder Mysteries television series to the silver screen. Nessie Davis reprises her role as Phryne Fisher, the sophisticated no nonsense 1920s private detective. The film is set a few years after the events of the third season. After freeing a young Bedouin girl from her unjust imprisonment in Jerusalem, Miss Fisher enlists the help of Detective Robinson to help solve a decade-old mystery of the crypt of tears and to uncover the truth behind the disappearance of a forgotten tribe. 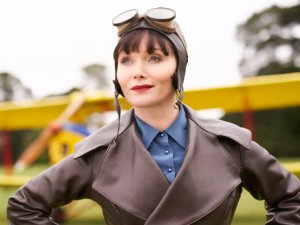 Viewers do not need to see the television series to understand the character motivations or plot, as these are explained in the film.

The film follows particular themes and a style which all 1920s noir murder mysteries adhere too, such as the Agatha Christie’s Death on the Nile and Murder on the Orient Express. One trope used in this particularly genre centers around the juxtaposition between the East and the West. The East is represented as mysterious, mythical and otherworldly whilst the West is seen as ordered and civilised. Although the genre of Miss Fisher relies on such tropes, they could have been subverted or commented on instead of being re-used. The film uses these tropes to create a formulaic plot.

Miss Fisher and the Crypt of Tears brings back characters’ audiences know and love and the film is a fun, mysterious adventure from start to finish.  The film’s budget is due in part to crowdfunding campaigns which made over $250,000. This shows the audiences’ love and support for the show and continual desire to hear Australian stories.