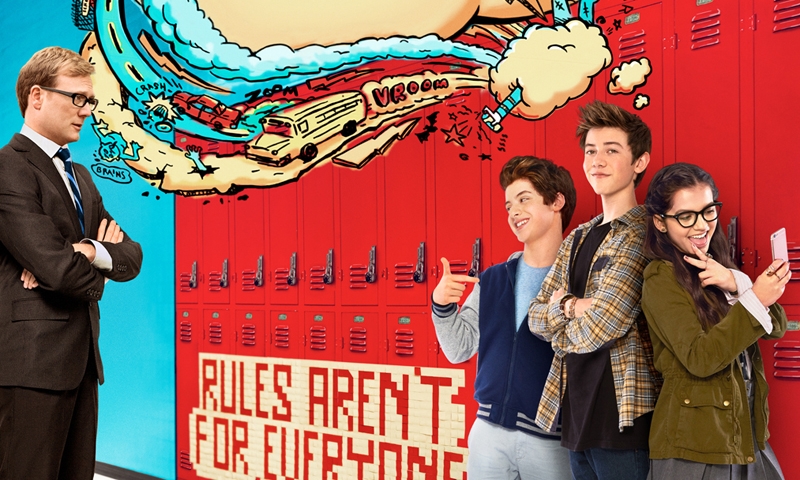 Thanks to Roadshow Films, we had the chance to see ‘Middle School – The Worst Years of My Life’ before its national release. This is our review of the movie, but as usual, no matter what we say, we still recommend you to go and see it at your local cinema because there is no better critic than yourself!

The nostalgia of our teenage years can be a powerful thing. We all have grown a little older, a little wiser and yet there’s something remarkable about our innocence as teenagers that can shake us to our core to this day. Middle School – The Worst Years of My Life (directed by Steve Carr) is a celebration of that, where hope is everywhere and anything is possible with the power of your imagination. The story based on the novel of the same name by the esteemed author James Patterson follows a teen named Rafe (Griffin Gluck) who loves the arts with his trusty sketchbook filled with imaginative cartoon characters that accompany him through these weary times. He has a sassy younger sister filled (Alexa Nisenson) and over their shoulders, is their hardworking single mother Jules played by Lauren Graham. When the family is still recovering from the loss of their beloved daddy, Rafe falls into a delinquent cycle that had him expelled from many high schools with only one more on the horizon that would take him in. But the school’s absurdly tyrannical Principal Dwight (Andy Daly) has other ideas.

Make no mistake, this film is first and foremost a movie for children. There are few moments of comedy and drama that are not excessively slapstick and children oriented with coming-of-age character tropes you’ve seen a thousand times before. However, there were a couple interesting twists that were drama powerhouses with a decent dose of surprise but its execution felt too little too late.

As far as a comedy family film goes, the humour is very hit or miss. The overt reliance on slapstick humour is painfully frustrating with constant embarrassing and clumsy actions that you wish the characters could just move on from. However, there were brief glimpses of light in the dark where you feel that perhaps the writers pushed through what they were forced to produce and offered some unexpectedly intelligent laugh-out-loud jokes.

Performance is where this film seriously shines especially for the vibrant young cast. Our lead boy Rafe is done with subtly and grace by the young Griffin Gluck with an absolute powerhouse of expression from his sister played by newcomer: Alexa Nisenson. Her performance during the darker times of the film were a revelation of acting prowess that steals the show from our lead. Whoever cast these talented kids could not have chosen be One thing to definitely note is the ambitious cartoon animation sequences occurring from the daydreaming of our imaginative protagonist. Many segments turn from the live action situation to a world of bright cartoon colours within Rafe’s mind where his principal can turn into something a lot more fictional and ridiculous for comedic effect or where a friendly two-headed monster comes out of his sketchbook asking Rafe for orders. These moments are fantastically crafted scenes of substance that offer little soul or purpose in the overall storytelling of the film.

Overall, it’s hard to recommend Middle School unless you have kids or wished you were a kid again. The film for all its intents and purposes does accomplish what it sets out to do but with just so little that is remarkable. If the script of this film set out for more diversity with more meaningful intent from the many imaginative cartoon sequences, perhaps we could’ve got something seriously special.

Middle School – The Worst Years of My Life is in cinemas now!