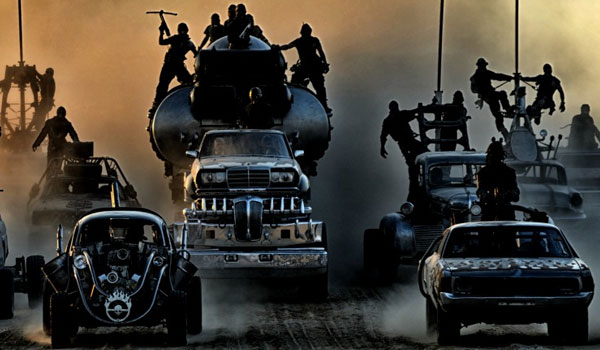 History will be recorded on Wednesday, May 13 as the sounds of suped up vehicles from MAD MAX: FURY ROAD roar through the City of Sydney for a once in a lifetime experience, culminating in a public showcase in front of one of Australia’s most iconic buildings, the Sydney Opera House.

While excitement gears up for the May 14 Australian release of MAD MAX: FURY ROAD, vehicles from the new film – ranging from trucks, sedans, pick-ups and motorbikes – will be parked on the Sydney Opera House Forecourt from 7am to 3pm.

Members of the public will have the opportunity to get up close and walk amongst the vehicles with specialised production crew on hand to answer questions and provide background information.

Crew members will demonstrate the abilities of the vehicles during a live showcase between 1pm and 2pm featuring cast members in full costume, providing fans with a sneak peek into the post-apocalyptic world George Miller has created.

Highlights of the showcase include the following cars: Razor Cola, an XB Ford Falcon Coupe; The Giga-Horse, a twin 1959 Cadillac Devilles; The Doof Wagon, an 8×8 M.A.N Missile Carrier and The Nuxcar, a Chevrolet five-door coupe.

However, the centrepiece will be the impressive War Rig, a bastardized Czechoslovakian Tatra and Chev Fleetmaster. A six-wheel drive 18-wheeler powered by twin V8 engines end-to-end, this fortified war machine with the soul of a hot rod has an elephantine scoop on the front and a massive double-payload of fuel tanks.

Roadshow Films Chief Executive Officer Joel Pearlman said the original Max Max films were a seminal part of Australian cinematic history and was thrilled to celebrate their return in such a unique way.

“Audiences will be blown away by the adrenaline-fuelled super-charged world that only George Miller can create and we could think of no better way to launch Mad Max: Fury Road in Australia,” he said. “The vehicles are characters themselves and we are excited to give the people of Sydney the exclusive opportunity to get up close to so many of them in such an iconic setting.”

“I’m so proud of our Mad Max crew. The magnificent teams who master so many disciplines: stunts, special effects, rigging, camera, design, editing and so on. Australians at their best… resourceful, highly skilled and graceful under pressure. These vehicles are a manifestation of their craft. I still get a buzz standing next to them, listening to the sound of the engines.”

New South Wales Deputy Premier and Minister for the Arts Troy Grant said Mad Max: Fury Road will put NSW on the world stage, with filming for the movie having taken place at the Western Sydney sites of Potts Hill and Penrith Lakes.

“I’m rapt Mad Max: Fury Road, the fourth instalment of an iconic Australian film trilogy, is soon to be back on our screens, showcasing our beautiful and diverse landscape while creating job opportunities and investment across the state,’’ he said.