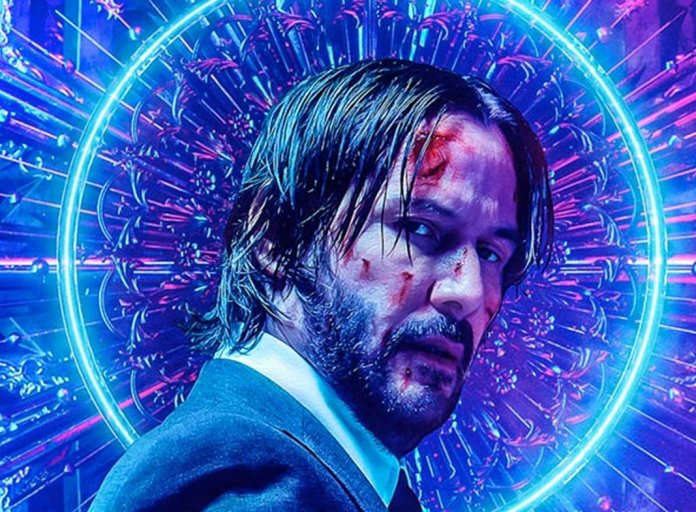 The John Wick movies are a sort of acid test for cinephiles. If you love the basic visual mechanics of cinema and its ability to convey physical causality, then you can enjoy the John Wick movies as peerless examples of the craft. If you demand much in the way of story, you’re out of luck, but if you want to see almost unbelievable stuntcraft, impeccable cinematography and exquisite mise en scène, you’ve hit the jackpot. Director Chad Stahelski starts John Wick 3 where John Wick 2 left off, with Keanu Reeves as the title character with one hour to flee the entire criminal underworld for violating the Continental Hotel’s rules about killing on the premises. With a massive bounty on his head, he has to use every ounce of ingenuity and skill to survive. It’s not only Wick who’s in trouble, as his friends Winston (Ian McShane) and the Bowery King (Laurence Fishburne) in deep trouble for providing assistance and not killing him on the spot, as pointed out by detestable new villain The Adjudicator (Asia Kate Dillon). Wick seeks help from The Director (Angelica Huston) of the Belarussian gang, while the Adjudicator enlists Zero (Mark Dacascos) to hunt him down. The film also takes a trip out of New York to Morocco to meet Sofia (Halle Berry), Berrada (Jerome Flynn) and The Elder (Saïd Taghmaoui), adding some stunning desert shots to the already striking visuals.

The world of the John Wick movies is as stylised as ever, with its underworld becoming even more expansive and surreal. Rivalling the Blade Runner films for nighttime cityscapes, director of photography and frequent Guillermo del Toro collaborator Dan Laustsen keeps everything in dark blues and browns with hypersaturated lighting reflecting crisply off every puddle and window. Given the jaw-droppingly elaborate stunts that pepper the movie, it’s testament to the skill of all involved that every shot keeps the action comprehensible while looking as good as it does. And boy, is there ever action in this film. The violence (which is why you’re going) is a step above even the last two installments, with an utter relentlessness and creativity that had our audience cheering, screaming and laughing at Wick’s gleefully brutal murders using everything from guns and knives to horses and library books. At times a degree of repetition does creep in but given how gruelling the choreography visibly is, this only adds to the tension of watching the increasingly bruised, battered and bloody Wick try to survive his fights.

Where things falter slightly is the sheer implausibility of some scenes taking place in front of an unreacting public, although how you react to this may be a question of taste given the completely surreal world everything is happening in. It isn’t quite as elegant as the second film in its world-building. But you’re not really seeing a John Wick movie for the story, after all. The film is highly self-aware and blackly funny and never less than entertaining.

John Wick: Chapter 3 – Parabellum is a love letter to action movies. It’s replete with references to other action movies, but not in a distracting way. Even the casting is chock full of A-list and B-list action stars from the past and present. If you love action movies, this film is made for you.