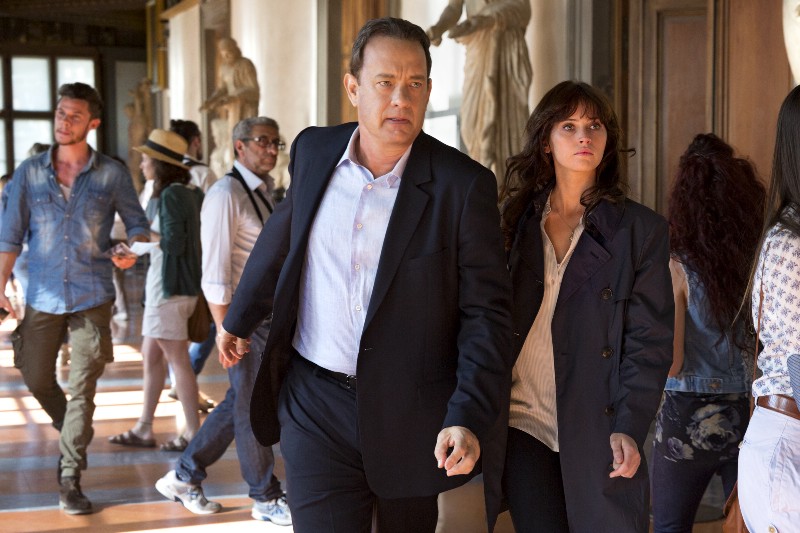 Langdon wakes up in an Italian hospital with a head injury and amnesia, and teams up with Sienna Brooks (Felicity Jones), a doctor he hopes will help him piece together his memories. Together they embark on a chase across Europe, racing against time to stop a global terror plot.

Hanks’ Langdon is a poor man’s Indiana Jones. Brainier, perhaps, but boring and charmless, and suffering from a concussion, giving him nauseating apocalyptic visions throughout the film. Jones is engaging as Sienna and this role kicks off a huge few months for her, as she’s set to star in a run of blockbusters including the lead role in December’s Star Wars spin-off Rogue One.

Joining in are an impressively international cast: Ben Foster as a crazed billionaire whose death in the opening minutes sets the plot in motion, with Omar Sy, Sidse Babett Knudsen and Irrfan Khan as key players.

While the exact plot points aren’t entirely predictable, the formula certainly is. The story sets up a convoluted scavenger hunt of clues based on Botticelli’s illustrations of Dante leading to a deadly virus that would wipe out half the world’s population. The dialogue feels forced at times and Hanks’ exasperation is occasionally laughable, but some moments of high drama keep you on the edge of your seat, and the final climatic scene raised my blood pressure ever so slightly.

There are a few other things to like; the production boasts two hours of impressive classical scenery and the CGI seemed tastefully restrained. I enjoyed (perhaps worryingly?) the unexpectedly blunt violence – more than a few bodies thud from the rafters – and the camera doesn’t pull its punches.

All in all, Inferno is an acceptable outing by the trilogy’s standard, but far from worthy of the talent involved. Now if only there was a virus to kill off mediocre movie franchises…