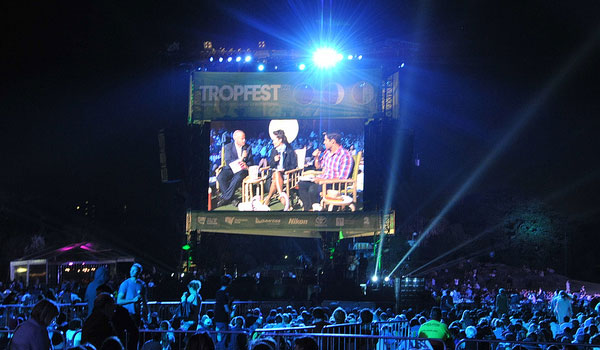 A change of date and a new venue have resulted in massive attendance at Tropfest 22. Young filmmaker; Matt Hardie took home the Festival’s top prize with his short about a transgender romance with a twist.

A quirky romantic comedy with an unexpected climax, BAMBOOZLED tells the story of Pete and Harry, two former flames who have a chance encounter after many years of being apart. When Pete discovers that Harry is actually his ex-girlfriend Helen (who has since undergone a sex change), the two of them decide to catch up over a drink. What follows is a touching, thought-provoking and ultimately hilarious tale of love, sexuality and revenge with a twist of reality.

No stranger to the Tropfest platform, director and actor Hardie previously wrote and directed LET IT RAIN, which took out the DSLR category at Tropfest earlier this year in February. His success at the last Festival inspired him to further pursue writing and directing – a decision that was no doubt a smart one.

Before a record crowd of more than 95,000 people, the Tropfest Finalist films captured the Festival’s signature item ‘Change’, offering up an eclectic selection of shorts across wide-ranging cinematic styles and genres including thrillers, dramas, animations, documentaries, mockumentaries and much more.

Festival Founder and Director John Polson said he is thrilled to usher in a new era for Tropfest at a time when an increasing number of Australian filmmakers are climbing up the ranks.

“This is an incredibly exciting new beginning for us. The move to Centennial Park, and the move to December, were both changes we’re ecstatic to have made. The quality of films screened today show that the emerging Australian film industry is one of the strongest in the world. Every filmmaker displayed a unique, creative and engaging way of telling their story, and all should be congratulated for making the finals,” he says.

“As is always the case, there were some were some intense debates in the deliberation room.”

Hardie is the lucky recipient of an all-new Toyota Corolla Levin ZR, a $10,000 cash prize (courtesy of Kennedy Miller Mitchell) and a trip to Los Angeles for a week of meetings with film executives, thanks to Motion Picture Association and Australian Screen Association.

And to keep him heading down the path of filmmaking success, he is now also the proud owner of a Nikon D800 DSLR and $2,000 RRP worth of Nikon lenses.

The Tropfest Signature Item (TSI) for the next year’s competition was revealed to be MIRROR.

NSW Minister for Tourism, Major Events and the Arts, George Souris, said the NSW Government, through its tourism and major events agency Destination NSW, is proud to support Tropfest in NSW, the home of Australia’s screen industry, in its 21st year.

“It is wonderful to see this successful event, which has kick-started the screen careers of many filmmakers from across Australia of all ages and experience, go from strength to strength.”

The winner of the Nikon DSLR category was Claude Gonzalez for his film ARIEL. This category was awarded for films shot entirely on DSLR cameras. Gonzalez bagged a brand new Nikon D610 and $3000 RRP worth of Nikkor lenses and accessories.

Don Percy took home second prize with his short MAKEOVER, while third prize went to Tom Abood for HONI SOIT QUI MAL Y PENSE. Best Male Actor was awarded to both Matt Hardie and Aaron Tsindos for their performances in BAMBOOZLED, and Best Female Actress went to 17 year-old Kaiya Jones for her portrayal in COPING.

Martin Sharpe was awarded the first ever Qantas Film Cadetship for his film STILL LIFE. The exciting new initiative will give Martin the opportunity to participate in a rare six-month paid internship with Qantas as part of the airline’s Digital and Inflight Entertainment division.

“Qantas is proud to offer this opportunity to Martin, already an extremely talented Australian filmmaker. We look forward to working with him and providing experiences that will help his career and make his mark in the industry,” said Ms Wirth.

“The Qantas Film Cadetship forms part of our wider strategy to nurture young Australian talent and support them on their creative journey by providing opportunities and showcasing their work to a global audience.”

For the first time in Tropfest’s long history, the general public are being given an opportunity to have their say by voting for the inaugural People’s Choice Award. The You Be The Judge mobile app, developed by digital partner Helium Creative and launched today, enables audiences to review, rate and comment on each finalist film.

Voting will remain open until midnight on Wednesday, December 11 2013, with the overall highest-rated film being announced on 12th December 2013. The app can be downloaded at the Google Play or App store now [http://tropfest.com/au/judge/].


This year, Tropfest was broadcast live to a television audience across Australia on SBS 2, who got up-close-and-personal with Tropfest’s celebrated guests on a glittering red carpet, as well as exclusively covering all the action at Tropfest.

Head to [youtube.com/tropfest] to watch all the Finalist films again.