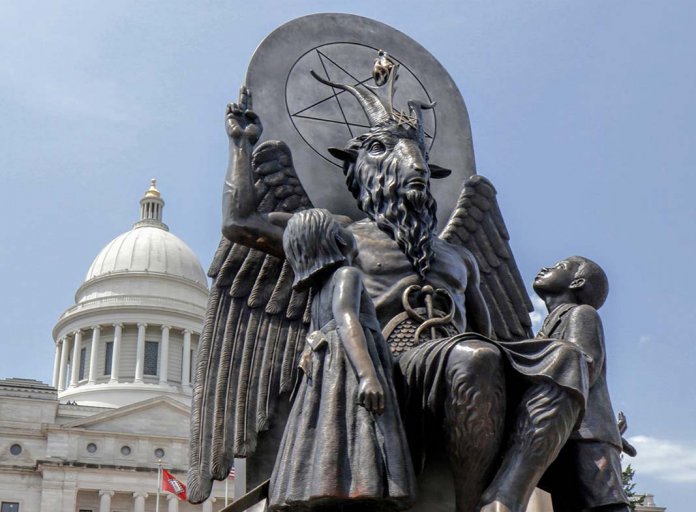 Penny Lane‘s Hail Satan? is a documentary on the Satanic Temple, a religious order founded by Lucien Greaves and Malcolm Jarry as a provocation to religious influence in American politics.

This is a very funny film, and using talking heads and archival footage it covers a surprising amount of ground, from the ascent of the Christian right in the US during the height of the Red Scare in the ’50s, the founding of the Church of Satan by Anton LaVey, to the Satanic Panic of the ’80s and ’90s and then the meteoric rise of the Greaves’ and Jarry’s religion. The Satanic Temple is a non-theist religion that doesn’t believe in a literal devil, but rather embraces Satanic ritual and iconography for its own sake, and to embrace the rebel spirit of Milton’s Lucifer from Paradise Lost.

They specifically became famous for crowdfunding a large statue of Baphomet to place at the Oklahoma State Capitol next to a sculpture of the Ten Commandments. Given that the US constitution expressly forbids the favouring of any particular religion over another, the statue was a deliberately inflammatory attempt to remind people of the benefits of secular government: You get your statue, we get ours.

Greaves is drily amusing in pointing out his motivations in the face of the hysteria his actions cause, and the subversive spirit of his organisation is infectious.Many of the interviewees are a laugh riot, especially the clean-cut, bow-tied lawyer Mason Hargett, who bears a more than passing resemblance in manner and appearance to Kenneth Parcell from 30 Rock, making his embrace of Satanism innately hilarious.

It’s not all fun and games, though, as one is periodically reminded of the dangers of provoking religious zealots in a country as heavily armed as America. And when the Detroit chapter of the Temple takes an explicitly partisan stance and endorses political violence, it becomes clear that the Satanic Temple needs to root out heresy just as much as its opposition does or risk the thin veneer of respectability they’ve earned.

Hail Satan? is definitely worth your time. It’s fun seeing the outrage generated by these arch-trolls, especially when it’s for a good cause. The origins of the Ten Commandments scupltures in particular should draw a genuine gasp from those unaware.

For tickets, times and the full program visit www.sff.org.au