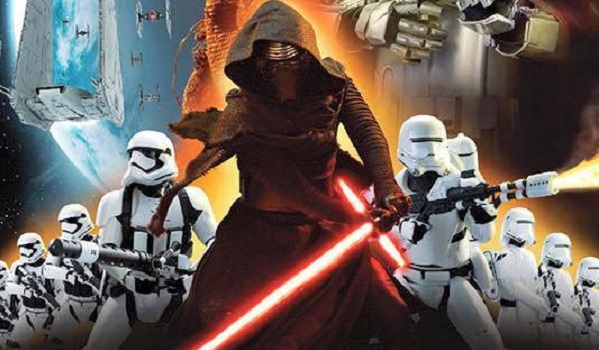 In addition to the fantastic trailer for Star Wars: The Force Awakens that broke the internet today, the first promotional artwork has also surfaced online. Several images of Kylo Ren and Captain Phasma, the big baddies in the upcoming seventh Star Wars Film, have popped up on a Spanish facebook page  and these images have now gone viral through Firstshowing.net , makingstarwars.net and starwars7news.com

Kylo Ren looks like a Sith Lord and is supposedly played by Adam Driver. Ren will most likely be the main villain of the new film, comparable to Darth Vader’s character in the original trilogy. The hooded Sith already popped up in both trailers with his trademark cross-shaped red lightsaber. Captain Phasma is the chrome-plated Storm Trooper Commander who according to rumours will be played by Gwendoline Christie, best known as Brienne of Tarth from Game Of Thrones. Phasma is supposedly in charge of Stormtrooper Finn (John Boyega), who will be one of the three main characters of the new film, along with Oscar Isaac‘s Poe Dameron and Daisy Ridley’s Rey.

Check out the impressive artwork below!