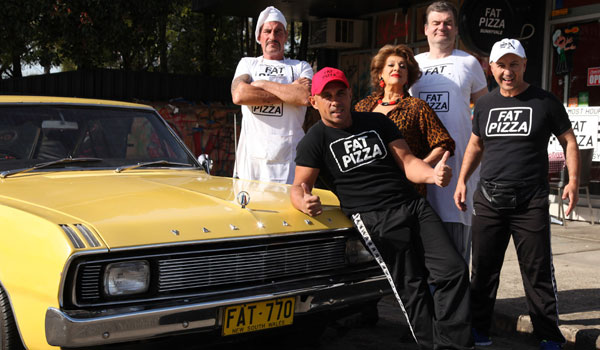 Transmission Films announced a series of Fat Pizza Vs Housos preview screenings, with some of the cast members in attendance.

About the film
Fat Pizza vs Housos is the story of two worlds colliding. The fully sick world of the Fat Pizza restaurant and its subwoofer-loving staff meets the houso-dwelling residents of Sunnyvale, a suburb where tattoos, Ugg boots and thongs are compulsory.

Pizza chef Bobo Gigliotti is released after 15 years in prison, his crime – assaulting a health inspector with a chainsaw. Rents have gone up in Australia and the only shop front Bobo can afford is in the infamous housing commission suburb of… SUNNYVALE. The all-stars from Fat Pizza, Swift and Shift Couriers and Housos unite in an epic battle of thongs, chainsaw, bikies and pizzas. Starring Paul Fenech, Johnny Boxer, Maria Venuti and Elle Dawe with cameos including Nick Giannopoulos, Kyle Sandilands, Jonesy, Angry Anderson, Bogan Hunters finalists and the return of ‘Sleek the Elite’.

It’s big, it’s cheesy, it’s wearing thongs and it’s coming at you in a stolen car covered in flannelette: Fat Pizza vs Housos.

DON’T MISS OUT ON THESE SPECIAL PREVIEW SCREENINGS

Fat Pizza Vs Housos is due for release November 27.