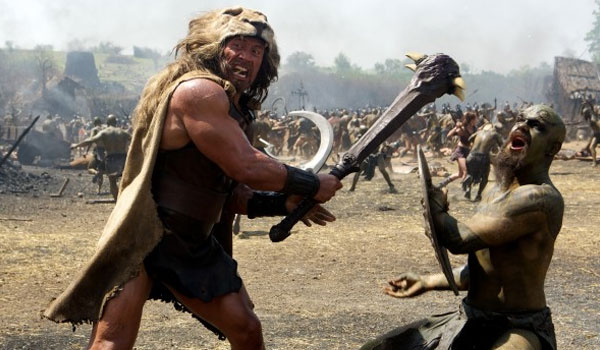 Our friends at Paramount Home Entertainment have provided us with this interesting Q&A with Hercules producer Brett Ratner ahead of the film’s home entertainment release in December.

Q: How did this idea about Hercules come about?

RATNER: This came from a graphic novel that I read. There have been so many incarnations of Hercules, but after I finished the graphic novel I thought that that was reason enough to make another movie. It demystified the myth, it turned it upside down. It was more of a story of a man who had to first believe in himself before he could become a hero. I really liked that.

Q: Did you like it because it was so different from all the other Hercules movies that have been made in the past?

RATNER: Yes, exactly. The other Hercules movies always showed him as the son of Zeus and living in a world of fantasy. This was a whole new version that I really liked.

Q: Did you always have Dwayne Johnson in mind as Hercules?

RATNER: To be honest, I didn’t really think about it. I was just working on the script from the basic novel. He called me and said he was going to come and see me. He sat on my sofa and said that he was born to play Hercules. He wanted to play Hercules ever since he came to Hollywood. Now I can say that I can’t see anybody else playing Hercules.

Q: Where do you see the difference between the graphic novel and the movie?

RATNER: This is a story about the man behind the legend. It’s more real, more modern, and more contemporary. I thought the Greek mythological experts would kill me for it, but they didn’t. They like it. I always wanted to do an epic film like Ben Hur or Lawrence of Arabia. So, this is my big epic movie.

RATNER: I love films about humanity. It’s more like the Magnificent Seven than a classic Hercules film. Everybody around him believes in him, I loved that message.

Q: You shot this film in Budapest, why?

RATNER: There are several reasons. One was that we needed a lot of outdoor land. Budapest is all flat. We wanted to build these huge sets with the size of football fields. We built the sets and then we went to Croatia to shoot the mountains. We green screened those back into the film.

Q: Have you been nervous about other Hercules movies that came out before yours?

RATNER: No, why should I? I had Dwayne Johnson, and there have been so many other movies. I wasn’t worried about the competition.

Q: Do you feel the pressure to be successful as a director, especially with a big budget project like this?

RATNER: No, not really. I have done many big movies before. And I like movies with big budgets. You can give the audience the biggest bang for their buck. When there is a 100 Million Dollar budget, I will try to put all the money onto the screen. And this one is a global movie.

Q: Does Hercules fit into the current superhero theme that is dominating in Hollywood right now?

RATNER: You know, Hercules was actually the first real superhero. If you read the biography of the creator of Superman, you will learn that he actually studied Hercules in order to create Superman. I was always fascinated by superheroes. Doing Hercules actually satisfied some of my desire to direct a superhero film.

Q: What’s next for you now?

RATNER: I am developing many things, and I am producing some movies. I will be directing a reinvention of “Beverly Hills Cop” for Paramount. I will look at a script in a couple weeks. I am also producing Russell Crowe’s next movie.

Q: When will you start shooting the new “Beverly Hills Cop”?

RATNER: We will start this fall. We start shooting in Detroit and then keep filming in Los Angeles.

Q: And how do you decide whether you are directing or producing?

RATNER: I can only direct one movie per year. Producing too many movies takes a lot of time. Producing is fun because I don’t have to work as hard. Directing is my passion though.

Q: How important is Blu-ray and On Demand for you?

RATNER: I love it. It’s like film school for me. I used to watch the laser discs and listened to the directors explain how they did certain things. It’s fascinating. And I love putting deleted scenes on the Blu-ray, so the movie fans can enjoy it. It’s very educational.

Q: Who were your big heroes when you were little?

RATNER: My grandfather. I had a lot of mentors in life. That’s why I think we are fascinated by superheroes. We like to look up to them.

Both the Theatrical and Extended Cut of the Thrilling Adventure Debut on
3D Combo Pack, Blu-ray™ and DVD December 17, 2014