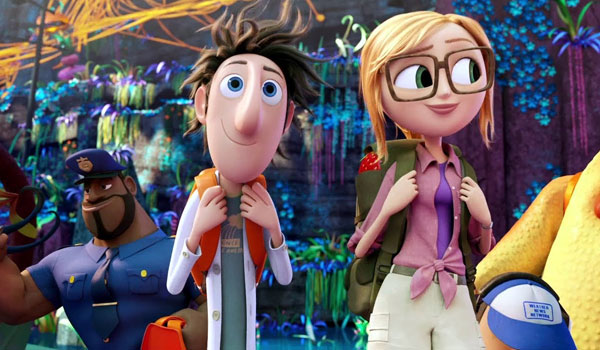 Sony Pictures released a video montage featuring Paul McCartney’s song “New” and footage from Cloudy With A Chance Of Meatballs 2.

“New,” which is produced by Mark Ronson and now available for sale as a digital download, is the title track from McCartney’s forthcoming “New” album, set for release on October 11th in Australia. The song will feature in the film in a sequence where Flint Lockwood is optimistically beginning a new chapter in his life.

“I loved watching the first film with my kids, so I’m very happy to have my new song included in Cloudy with a Chance of Meatballs 2.”

About the film
Cloudy With A Chance Of Meatballs 2 picks up where Sony Pictures Animation’s hit comedy left off. Inventor Flint Lockwood’s genius is finally being recognised as he’s invited by his idol Chester V to join The Live Corp Company, where the best and brightest inventors in the world create technologies for the betterment of mankind. Chester’s right-hand-gal – and one of his greatest inventions – is Barb (a highly evolved orangutan with a human brain, who is also devious, manipulative and likes to wear lipstick). It’s always been Flint’s dream to be recognised as a great inventor, but everything changes when he discovers that his most infamous machine (which turns water into food) is still operating and is now creating food-animal hybrids – “foodimals”! With the fate of humanity in his hands, Chester sends Flint and his friends on a dangerously delicious mission, battling hungry tacodiles, shrimpanzees, apple pie-thons, double bacon cheespiders and other food creatures to save the world again!

ONLY AT THE MOVIES! DECEMBER 5