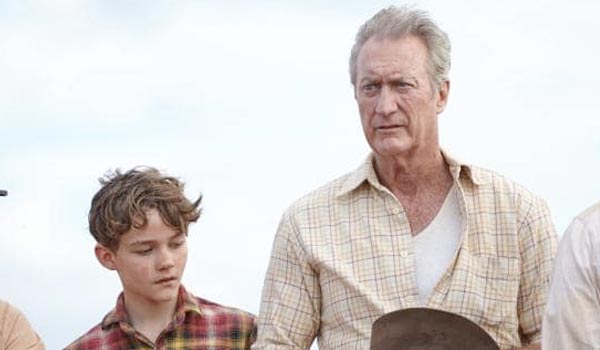 The Award will be presented to Bryan at the 2018 AACTA Awards Ceremony presented by Foxtel on Wednesday 5 December at The Star Event Centre in Sydney, telecast at 8:30pm on Channel 7. Tickets are now on sale from www.aacta.org/whats-on.

First presented in 1968, the Longford Lyell Award honours Australian film pioneer Raymond Longford and his partner in filmmaking and life, Lottie Lyell. The Award is the highest honour that the Australian Academy can bestow upon an individual and recognises a person who has made a truly outstanding contribution to the enrichment of Australia’s screen environment and culture.

“It’s an honour – thank you to the Academy,” said Bryan Brown. “I’m an Australian telling Australian stories and I love it.”

Brown first debuted on screen in 1975 as a policeman in SCOBIE MALONE, delivering just two lines. He went on to cut his teeth with some of Australia’s leading directors, with supporting roles throughout 1978 in films such as Fred Schepisi’s THE CHANT OF JIMMIE BLACKSMITH, Bruce Beresford’s MONEY MOVERS and Phillip Noyce’s NEWSFRONT, before taking on leading roles in Donald Crombie’s CATHY’S CHILD (1979) and Albie Thoms’ PALM BEACH (1980).

In 1980, Brown received his first AFI Award nominations, becoming the first male actor to be nominated for both Best Lead and Best Supporting Actor in the same year. Nominated for Best Lead Actor in STIR, Brown won his first AFI Award for Best Supporting Actor for his role as Lt. Peter Handcock in Bruce Beresford’s BREAKER MORANT; a performance that garnered international attention.

During the next decade, Brown found huge success in the US, with roles including: television mini series A TOWN LIKE ALICE (1981); Paul McCartney’s Golden Globe nominated GIVE MY REGARDS TO BROAD STREET (1984); Golden Globe nominated rom-com COCKTAIL (1988) opposite Tom Cruise; Oscar®, BAFTA and Golden Globe Award-winning drama GORILLAS IN THE MIST (1988) opposite Sigourney Weaver; and the popular Australian television film THE SHIRALEE opposite Noni Hazlehurst, based on the novel by the same name (1987).

During this time, Brown received Golden Globe and Primetime Emmy nominations for his role as rogue stockman Luke O’Neil in THE THORN BIRDS (1983). He also earned two more AFI Award nominations: Best Supporting Actor for REBEL (1985), in which he starred alongside Matt Dillon and Debra Byrne, and Best Lead Actor for THE UMBRELLA WOMAN (1987).

He won his second AFI Award twelve years later for Best Supporting Actor for his role as gangster Pando in TWO HANDS (1999), opposite Heath Ledger and Rose Byrne. He received his first AFI nomination as a producer in 2009 for BEAUTIFUL KATE, which also saw him nominated for Best Supporting Actor a fourth time. In 2005, Brown was inducted into the Order of Australia for his charity work and contributions to the Australian film and television industry.

Brown’s career spans over four decades with over 91 film and television credits including 15 AFI and AACTA Award-winning productions and two of the top 50 films of all time at the Australian box office. Notable credits include: action hero Roland ‘Rollie’ Tyler in F/X (1986) and its sequel F/X2 (1991); the unforgettable Leland Van Lew in rom-com ALONG CAME POLLY (2004) alongside Ben Stiller and Jennifer Aniston; mini series 20,000 LEAGUES UNDER THE SEA (1997) alongside Michael Caine and Patrick Dempsey; Baz Luhrmann’s AUSTRALIA (2008); a guest role as the Aussie love interest for Christine Baranski’s Diane Lockhart in Golden Globe and Emmy Award-winning series THE GOOD WIFE (2012); AACTA Award-winning mini series DEADLINE GALLIPOLI (2015); and as the true-blue, terse Aussie grandfather in AACTA nominated family film RED DOG: TRUE BLUE (2016).

“In the 38 years since Bryan received his first AFI Award, we have seen him firmly established as one of Australia’s most respected actors and, as one of our earliest performance winners, it is fitting that we honour Bryan this year as AFI | AACTA celebrates its 60th Anniversary,” said AFI | AACTA CEO Damian Trewhella. “We are full of admiration for Bryan’s commitment to his craft, his role as a mentor to so many performers over the years and as an ambassador for the Australian screen industry. On behalf of AFI | AACTA, it is a pleasure to honour Bryan alongside so many of Australia’s great men and women of screen, and we look forward to seeing him honoured at the 2018 AACTA Awards Ceremony presented by Foxtel next Wednesday.”