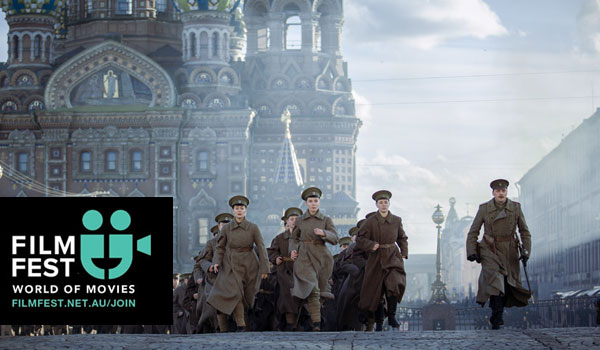 Want to enjoy the red carpet film festival experience, pre-revolution Moscow style, without the trip to Russia? Forget the political awareness of old Eisenstein flicks…FilmFest is presenting a fun-filled combination of blinis, vodka cocktails and the best in modern Russian film at the VIP pre-screening party for the Russian Resurrection Film Festival (Saturday October 31st at Event Cinemas, George Street).

Hosted by festival director Greg Dolgopolov, party attendees will be treated to a VIP cocktail and blini party before heading to the Australian premiere screening of Sunstroke. Sunstroke is an epic saga directed by Academy Award winning director Nikita Mikhalkov, taking place in 1920 in an imperial Russia on the verge of collapse. It tells the story of a Lieutenant loyal to the Tsar awaiting his fate in a prison camp while remembering his encounter with a married woman, years earlier.

The VIP party is an entree to one of Australia’s most innovative film festivals, the Russian Resurrection Film Festival (RRFF), which was founded in 2003 as a small festival servicing mainly the Russian-speaking community in Sydney, Melbourne and Canberra. In the past eleven years, the Russian Resurrection Film Festival has grown rapidly tripling in size and geographic reach covering Sydney, Melbourne, Brisbane, Adelaide, Canberra, Perth and as of 2014, New Zealand.

The RRFF has been growing and expanding Russian cinema and culture Australia-wide to become one of the oldest, largest and most respected Russian film festivals outside of Russia.

This years program features films including Ballad of a Soldier (1962), and the animation Adventures of Serafima (2015), while the opening night showcases the historical drama Batallion (2015) at Event Cinemas George Street.

For fans of Russian cinema outside of Sydney, FilmFest tours are pleased to partner with VIP Travel Club for convenient flight and accommodation options. In addition, anyone who takes up a FilmFest Tour or Event offer is eligible to join FilmFest VIP Gold at only $65 – ie $30 off the usual price. Use Voucher code ‘GOLD30’ at this link.