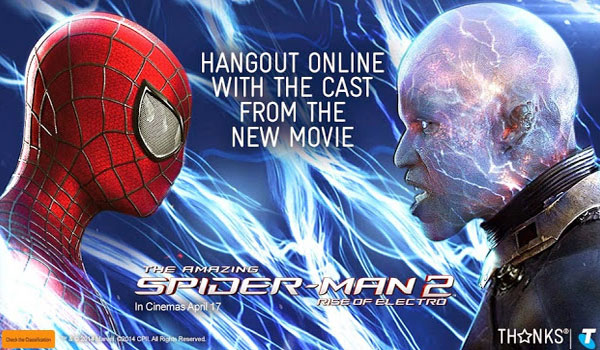 Telstra Thanks is teaming up with Sony Pictures Releasing to host an exclusive Google+ Hangout for the highly anticipated film The Amazing Spider-Man 2: Rise of Electro on Friday, 21 March 12.00noon AEDST.

The film’s leading stars, Andrew Garfield and Emma Stone will take part in the Google+ Hangout at a secret Telstra location, connecting with customers across Australia to answer questions, and share anecdotes about their work in the movie.

Fans around the world can tune in and watch the Google+ Hangout hosted by comedian and radio host Merrick Watts by going to Telstra’s Google+ page on https://plus.google.com/+Telstra or telstra.com/movies.

Fans can also get involved on twitter using #telstrathanks and #telstrahangout or via the event on Google+.

Radio host and comedian, Merrick Watts said he is super excited to be hosting his very first Telstra Thanks Google+ Hangout.

“Talking to Emma Stone and Andrew Garfield is going to be pretty awesome, but being able to connect with true fans via this cool technology is going to be mind blowing.

“Telstra Thanks are always looking at innovative ways to connect fans to their favourite stars; this is just another example,” said Merrick.

Telstra launched the Thanks loyalty program February 2013 and has since sold over a million tickets across Movies, Music and Sport. The program continues to look at ways to thank customers for being with Telstra by connecting them to the things they love.

Telstra’s Director of CRM, Digital and Loyalty, Nick Adams, said Telstra Thanks is excited to welcome the Amazing Spider-Man stars to take part in the Google+ Hangout.

“Through technology, Telstra helps people connect to the things they love and I’m looking forward to seeing customers from across the country connect with the Spider-Man stars.”

“We encourage customers to get to the movies and enjoy the film, through Telstra Thanks,” said Mr Adams.

About ‘The Amazing Spider-Man 2: Rise Of Electro’

It’s great to be Spider-Man (Andrew Garfield). For Peter Parker, there’s no feeling quite like swinging between skyscrapers, embracing being the hero, and spending time with Gwen Stacy (Emma Stone). But being Spider-Man comes at a price: only Spider-Man can protect his fellow New Yorkers from the formidable villains that threaten the city. With the emergence of Electro (Jamie Foxx), Peter must confront a foe far more powerful than he. And as his old friend, Harry Osborn (Dane DeHaan), returns, Peter comes to realize that all of his enemies have one thing in common: Oscorp.

The Amazing Spider-Man 2: Rise of Electro will release in Australian cinemas on April 17, 2014.