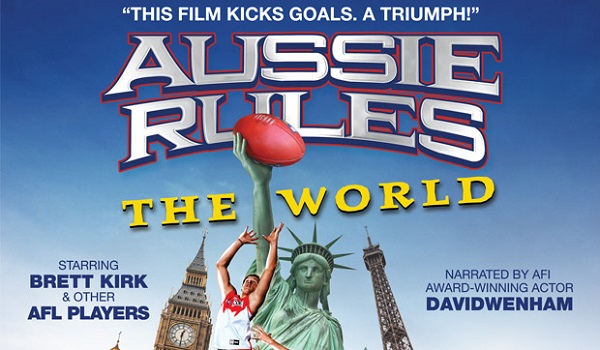 Aussie Rules the World follows former Sydney Swans captain and premiership player Brett Kirk on his journey as the AFL‘s International Ambassador as he tries to introduce the great game to the world.  Filmed in 2011 by Michael McIntyre in Kirk’s first year of retirement, the Swans Legend takes his wife and four young children across the globe to India, Europe, South Africa and the USA, (just to name a few locations on the AFL’s itinerary), in a bid to introduce the game internationally and to foster existing Aussie Rules leagues around the globe. The idea of the international outreach by the uniquely Australian support is due to the fact the AFL are wary of the growing popularity of other sports in Australia, particularly soccer. The Footy League is also worried about the ease of access for audiences to view international sports since the introduction of pay TV subscriptions. The film focuses on Kirk’s involvement in getting more players internationally than spectators, and it is done with endearing effect as you see the fractions of young kids and adults learning the game and skills of the complicated sport. There is a real focus on the effects the game has on community, and on how a simple game of footy can unite differences ultimately changing the face of the game. It doesn’t really capture the spectacle and excitement of the game that sees almost seven million match tickets sold each season, making AFL the fourth most attended professional league worldwide.

Fans of the Zen, laidback captain will enjoy taking this journey with him; there are nearly as many shots of him handballing a football to himself in front of international landmarks as the number of tackles he laid in all of his courageous career. The training of the international teams is in preparation for an international Aussie Rules competition held in Australia that features in the second half of the film.

The documentary also shows how diversity and multi-culturalism are already happening in the AFL, as we see an interview with Richmond’s Bashar Houli, a devout Muslim who is the AFL’s current cultural ambassador. The international potential of the sport is emphasized by highlighting the success of  Mike Pike, the first Canadian and former international rugby union player to play in the AFL, and his pivotal role in the Swans’ victory in the 2012 Grand Final.

The documentary provides interesting views, although it is basically an 84 minute predecessor to the NAB’s Footify campaign from last year’s AFL season year.

Aussie Rules the World will be available on iTunes and DVD from 21st July.

Watch The Trailer for the film here:
[youtube http://www.youtube.com/watch?v=_ud_s9FzrKk#t=26]